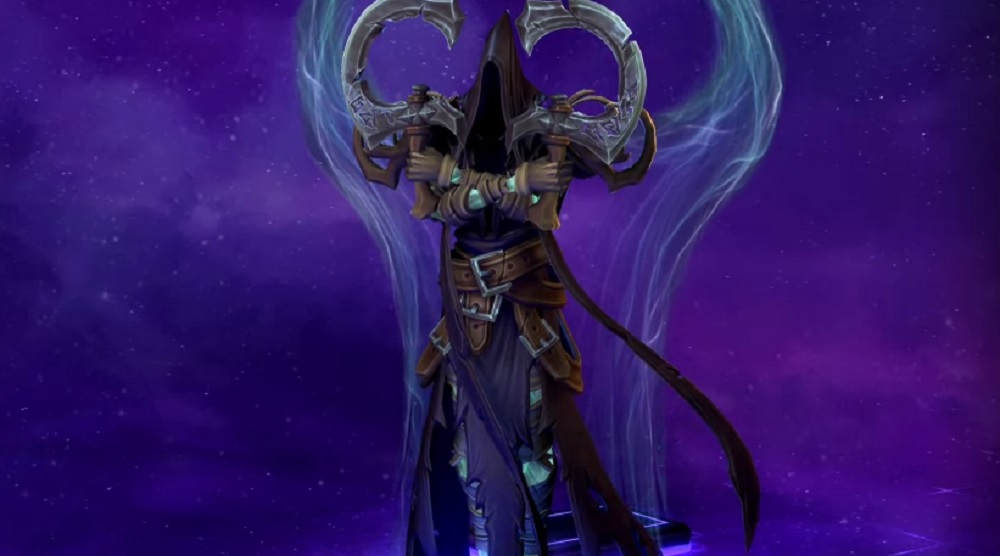 [Update: Here’s a list of talents and the spotlight!]

Diablo is one of the most requested universes for Heroes of the Storm, and now we have another addition to the Nexus — Malthael from Diablo III. He’s an assassin that can sustain himself through healing abilities, as well as teleport and apply marks (Reaper’s Mark) to enemies that grants various bonuses. Astute DOTA fans will see some similarities with Necrophos.

Blizzard calls him a “much requested hero,” though given that he debuted in earnest for an expansion pack for Diablo III, I’d put him after Baal, Mephisto (one of my personal favorites), and a few others. I haven’t played him yet but he seems like a killer solo laner, as he has a Thrall-like ability to sustain himself. His basic attacks also reveal enemies, untalented, which will make him a good counter for quickmatch stealthies, and one of his ultimates is a tank-buster. It’s too early to judge but he seems extremely viable day one.

For those who haven’t been keeping track, it’s been six heroes since we’ve seen a Warcraft entry. Before that there were five Warcraft characters in a row. No timeline was given for Malthael, but since D.Va arrived quite a while ago (it’s been nearly a month) he should hit the game soon. I hope he has some good pre-game banter with Tyrael.

Malthael [Heroes of the Storm]

1 [Z] On a Pale Horse – Gain an additional 20% Movement Speed while mounted.

1 [Active] Fear the Reaper – Activate to increase Movement Speed by 25% and pass through other units for 4 seconds.

7 [Active] Touch of Death – Activate to reduce healing received by Heroes afflicted by Reaper’s Mark by 50% for 4 seconds.

10 [R1] Tormented Souls – Gain 20 Armor and unleash a torrent of souls, continually applying Reaper’s Mark to nearby enemies for 4 seconds.

10 [R2] Last Rites – Apply a death sentence to an enemy Hero that, after 2 seconds, deals damage equal to 50% of their missing Health.

Repeatable Quest: Enemies killed while under the effect of Last Rites permanently reduce its cooldown by 5 seconds, to a minimum of 15 seconds.

13 [Trait] Ethereal Existence – Gain 15 Physical Armor per enemy Hero afflicted by Reaper’s Mark, up to a maximum of 45.

20 [R1] Reaper of Souls – While Tormented Souls is active, Hero Takedowns extend its duration by 4 seconds.

20 [R2] Angel of Death – Last Rites heals for 100% of the damage dealt, and its current and future cooldown reduction bonuses are doubled.

20 [E] Final Curtain – Death Shroud leaves a trail in its wake for 4 seconds, applying Reaper’s Mark to enemies in its area.