Imagine yourself on Tea Olive, the first hole of the famed Masters course at Augusta National. Trying to avoid the bunker on the right side of the fairway, you aim your tee shot to the left — but alas, you push it a bit too far, and it ends up in the trees. You can play conservatively and dig the ball out of the trees onto the fairway before trying for the green, but you’re a pro golfer, and you can’t afford the extra stroke against the stiff competition.

The more risky and difficult choice is to close your stance, stand with the ball near your back foot, and take an inside-out swing that curves the ball around the trees. With your skill and a healthy dose of luck, that will push the ball up the fairway and onto the green in regulation.

You couldn’t pull that off in EA Sports’ Tiger Woods PGA Tour — until now.

[Editor’s note: I played the Xbox 360 version of the game, which offers full Kinect support. I’ll cover the Kinect integration in a separate article. –Samit] 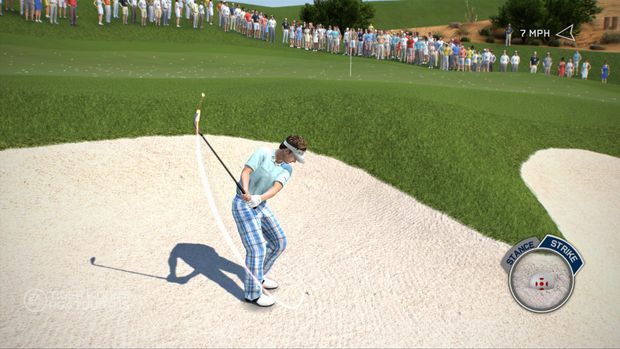 Situations like the one I outlined above, along with PGA Tour 13′s vastly expanded shot controls (dubbed Total Swing Control), serve to highlight how severely previous games in the franchise limited your shot-making ability. The new mechanics give you full control over a virtual golfer’s swing with both analog sticks, opening up the possibilities and putting the onus on you to execute the perfect shot. The left stick, as ever, governs the arc of your swing, while the right stick aims your club at a particular point on the ball.

In past Tiger Woods games, you might have flicked the left stick forward as hard as possible, in an effort to add power to your shot. But I’m going to let you in on a little secret, courtesy of Brent Nielsen, the game’s Executive Producer at EA Tiburon: all you were doing was wearing down your left stick more quickly. This year, the game translates your exact left-stick motion into a swing, and it provides useful pre- and post-shot feedback to help you fine-tune that swing. 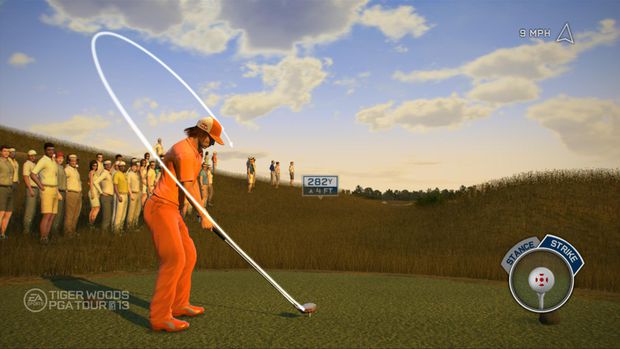 An on-screen trail represents the arc your backswing should follow to execute your shot; a notch on the arc signifies the point at which you should begin swinging forward. You can extend your backswing or swing your club forward more quickly for extra power, but that will afford you a smaller margin of error on the accuracy of your follow-through. Tempo is important, too; a smooth back-and-forth motion is your best bet. Note that the arc of your swing will follow your left-stick motion exactly, thanks to new animations. I pulled back on the stick in all kinds of directions, and watched as my golfer changed his motion to reflect the new swing planes. After the shot, the game will tell you how well you executed your shot, providing information about over/underswinging, tempo, and accuracy.

The right stick points your club’s sweet spot at different spots on the ball; this aspect of the swing will vary with the ball’s lie. Until now, sitting in deep sand, for example, only affected a shot’s power — all you had to do was swing harder to send the ball flying farther. “It was a math equation,” Nielsen told me, lamenting that you had no fine control over a shot’s trajectory. Previous Tiger Woods games compensated for that by offering a variety of shot types, such as punch, flop, and pitch, but they couldn’t hide the fact that the short game has always been the weakest part of videogame golf. 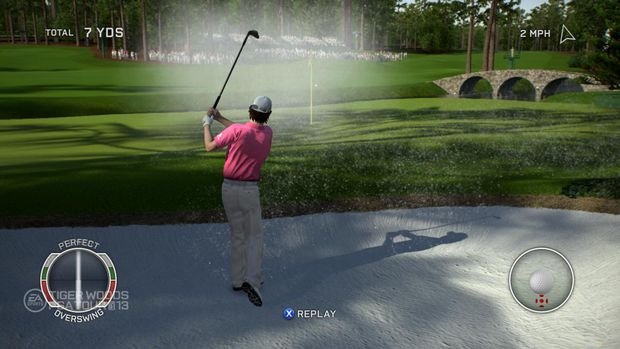 In PGA Tour 13, hitting the top of the ball will produce a line drive, while aiming low will result in a shot with a high arc. (Of course, you can aim anywhere in between.) On the lower difficulty levels (Amateur and Pro), all you have to do is use the right stick to move the sweet spot cursor to a particular place. But Tour Pro and Tournament require you to hold the right stick in place at that spot while swinging with the left! You can keep the shot even lower — say, to avoid tree branches — by moving the ball back in your stance and hitting it from your back foot. The game also lets you open or close your stance to add draw or fade, respectively, to your shot. According to EA, all the permutations provided by Total Swing Control add up to about 62.5 million possible shots.

Also new this year is the Tiger Legacy Challenge mode, which lets you relive important milestones in Woods’ storied career. You start out practicing in Tiger’s backyard as a toddler, whacking balls into a net and aiming for the kiddie pool. The next step for toddler Tiger is a 1978 appearance on The Mike Douglas Show with his father, where he shows off his skills for the host, and guests Bob Hope and Jimmy Stewart. EA Tiburon created seven different models of Woods at various ages, and you play through ten eras over the course of his career. It seems like a charming way to illustrate Woods’ path from two-year-old wunderkind to the top of the golfing world. 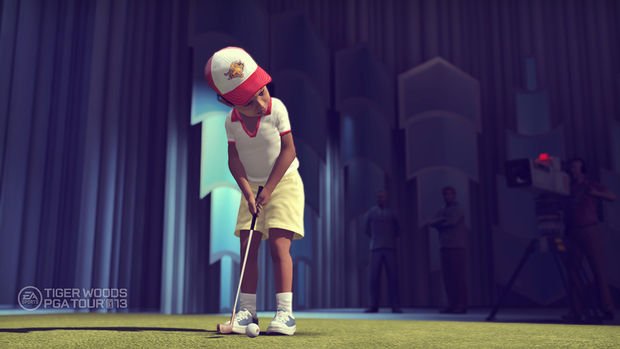 Last year, EA Tiburon redesigned the game around The Masters, delivering an experience like no other in a truncated development cycle. With a full year in the oven, PGA Tour 13 looks like it could provide the franchise’s most significant change since the introduction of analog-stick swinging.