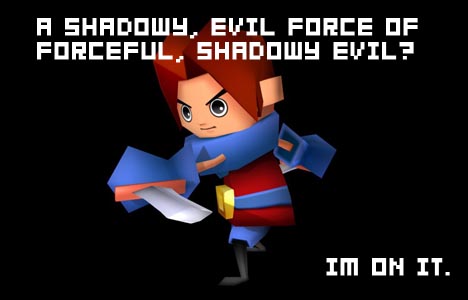 If someone were to ask what you thought we could use more of on the DS, RPGs likely aren’t going to be the first idea out of your mouth. Not that RPGs on the DS are bad in any way simply on the face of them, but there’s a glut of the things, and quite a few of them are simply utilized as channels through which shovelware can be, well, shoveled.

But if that same imaginary writing device said they were releasing an RPG for the DS crafted by Hironobu Sakagushi and Nobuo Uematsu of Final Fantasy fame — as well as Naoto Oshima, who worked on a little thing called Phantasy Star (maybe you’ve heard of it) — it’s safe to assume you’d be more than a little enthused. Well, strap on your enthusiasm-safety-goggles, because Majesco is doing just that.

Majesco has announced an RPG for the DS called AWAY Shuffle Dungeon today, being developed by Mistwalker Studios. The game centers around “Sword” and his quest to rescue villagers kidnapped from the village of Webb by some mysterious evil. The plot is basically de rigueur when it comes to RPGs, but with the names attached to this release, the game could be about rescuing slices of white bread from the indignity of growing moldy in my refrigerator and I’d still pick up a copy.

AWAY Shuffle Dungeon will also feature a co-op Raid Battle Mode, in which special weapons and armor can be equipped that are unable to be used in a single player campaign. Between this and the upcoming Chrono Trigger port, this is shaping up to be a great time to be a DS owner.

EDISON, N.J., July 7, 2008 – Majesco Entertainment Company (NASDAQ: COOL), an innovative provider of video games for the mass market, in partnership with leading developers Mistwalker and AQ Interactive, today announced premier RPG AWAY Shuffle Dungeon for Nintendo DS™. Players take control of the young hero “Sword,” the sole resident left of the once booming Webb Village, who must rescue as many kidnapped townsfolk as possible from a mysterious unknown that has been slowly “spiriting them away.” AWAY Shuffle Dungeon includes creative contributions from renowned industry visionaries: RPG creator Hironobu Sakaguchi, character designer Naoto Oshima and composer Nobuo Uematsu.

“We are very excited to be working with the collective creative talent of Hironobu Sakaguchi, Naoto Oshima and Nobuo Uematsu,” said Jesse Sutton, Chief Executive Officer, Majesco. “Their experience creating high quality, best-selling games means that AWAY will be well-positioned for success when it hits retail this fall.”

In AWAY Shuffle Dungeon, an unknown force has stripped Webb Village of its residents, and now the sole heroic survivor, Sword, must rescue the stolen villagers from the ominous dungeons as he strives to expose and defeat the mysterious thief.  Sword must first collect and use various objects including musical instruments to reveal the secret dungeons where prisoners are being held. But successfully saving them is another challenge altogether given a unique timed “shuffle” mechanic that reconfigures the dungeon prisons and hurts Sword and any survivors still caught within when the time runs out. Saved villagers will lend assistance to Sword’s quest, as will the magical ‘Fupongs’ and dungeon treasure he finds that lets him shop in the village specialty stores for armor, weapons, health, medical aid and more.

AWAY Shuffle Dungeon allows players to navigate in both the 2D Shuffle Dungeons and the 3D Webb Village, and features voice-over cinematics that breathe life into the characters in this extraordinary mystery.

AWAY Shuffle Dungeon for Nintendo DS™ is expected to release this fall. For additional information about Majesco’s exciting line of products, please visit www.majescoentertainment.com.