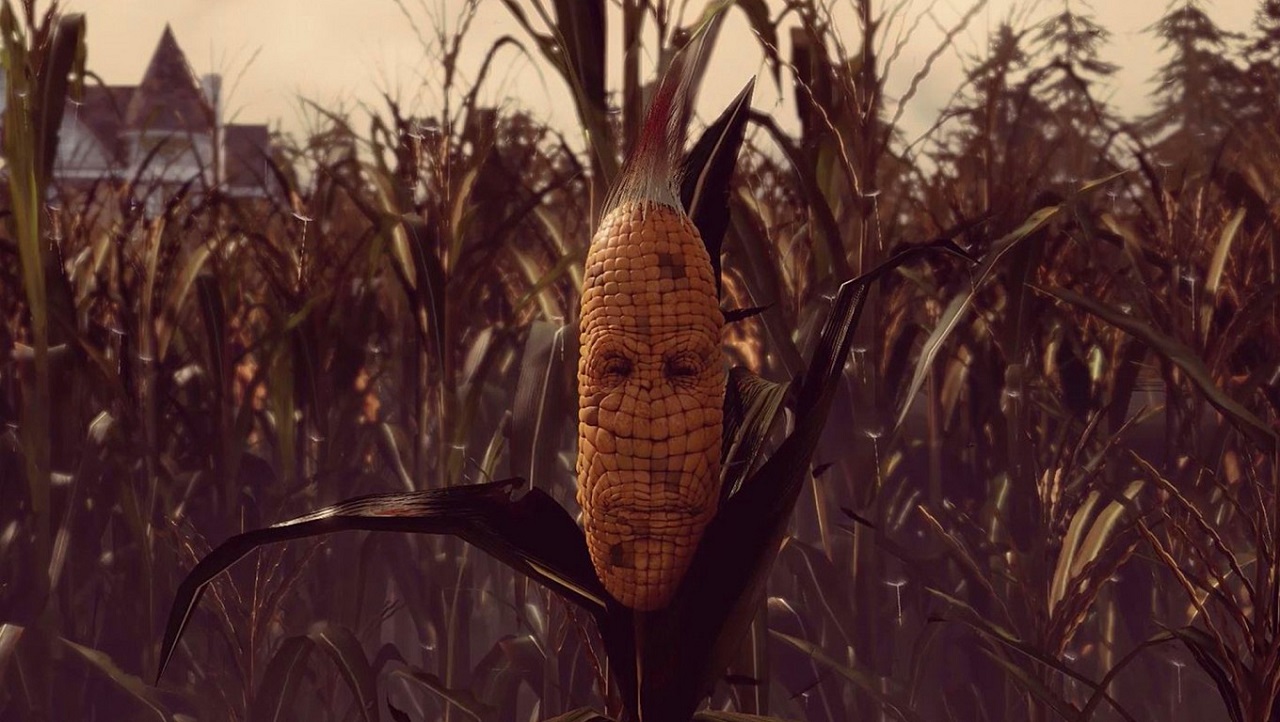 A fistful of corn

Cornfields are an underrated pick for places that have the potential for bad and/or otherwise weird shit to happen. Sure, they aren’t as ubiquitously ominous as abandoned hospitals or decrepit mansions, but cornfields have a long history of being places where the spooky and weird tango.

Children of the Corn taught the world that kids, if left unchecked, would spend their time playing in cornfields and summoning elder gods. Aliens — or bored farmers — have turned huge swaths of corn into stalky canvasses for artistic expression. Halloween season transforms unassuming rows of corn into veritable mazes where maniacs, ghouls, and other terrors lurk. Hell, even walking through a cornfield in broad daylight can be a traumatic experience since our squishy human flesh can be sliced by a rigid leaf with surprising ease.

Basically, outside of their food-providing purpose, there’s nothing good about cornfields.

I recently sat down to check out a preview build of Maize. It’s a game about — you guessed it — cornfields. However, instead of chainsaw-toting psychopaths or bizarre alien geometry, Maize is populated with puzzles, secret research facilities, and sentient stalks of corn. After playing through the short preview build, I’m not sure if Maize has reversed my anti-cornfield stance, but I am sure that I’m eager to see more of this first-person puzzler.

Maize, fittingly, begins on the outskirts of an impossibly thick cornfield. There’s little in the way of introductions really. A short cutscene obscured my vision with trippy colors before ceding control. Once I had the ability to move forward, there was no choice but to follow a narrow path into the maw of the maze.

I’d be lying if I said that Maize didn’t immediately grab me. There’s something about the game that makes it feel like a monster is hiding just around the corner, waiting to jump out for a cheap scare. Even though most of my time with Maize was spent under the warm glow of a sunny day, the combination of foreboding atmosphere and dilapidated farmhouses conjured the kind of minute-to-minute anxiety found in most horror games.

Though it seems to have all the trimmings of a horror game, Maize is hardly that. In fact, it has much more in common with old-school adventures games than the new wave of first-person spookfests that pop up each month.

Instead of scares, I found a handful of object-based puzzles. Much of Maize revolves around collecting items scattered about the environment and finding a place to use them elsewhere. In the preview, my first challenge involved finding three specific tokens — a hand, keychain, and CD — that could be used to gain access to a strange bunker.

Compared to other puzzle games, Maize doesn’t seem to ask a lot of players when it comes to figuring out solutions. I found the three items I needed for the bunker door with relative ease just by exploring an abandoned house and a nearby clearing. Objects that you can pick up are outlined and places they can be used glow, making the puzzles I came across a straightforward process of scrolling through everything I’d found and clicking to interact with the environment.

Once I’d secured a severed hand (yuck), CD (who listens to those?), and keychain (lol, nerd), it was time to double back and see if I could get into the bunker.

That’s when things got weird.

Maize’s aforementioned sentient cornmen greeted me by the bunker. They weren’t mean or intimating, outside of the initial shock that comes from realizing you’ve been surrounded by talking starches, but rather they were sort of annoying. I was told that I had to solve a riddle before gaining access to the bunker, but the cabal of corn became quickly lost interest in me in favor of doing a sort-of ‘Who’s on first’ routine with one another.

While I admit that I didn’t expect Maize’s corn creatures to be as goofy as they were, it made sense in hindsight. Maize might have started off with a foreboding feel, but every item I’d picked up featured wacky flavor text and every tutorial prompt was decidedly self-aware. It took me a while to realize it, but Maize’s greatest trick wasn’t that it wanted to scare me. Instead, it wanted to take me on an journey of absurdist moments.

This revelation came at the perfect time, because the bunker is where things got, well, corny. The sleek halls pointed to the bunker’s true purpose as a research lab. Though it was abandoned, a handful of well-placed sticky notes indicated that two scientist — Bob and Ted — had worked there. Each message that I found presented them as an odd couple of scientific proportions. One serious, one seemingly quite stupid, Bob and Ted’s notes became brightly colored breadcrumbs, pointing me in the right direction from context clues in their bumbling messages.

The laboratory was the previews’s final and most interesting section. While the cornfield and farmhouse seemed to point towards a horror angle, my time in the underground facility indicated that Maize was more interested in the silliness of science.

Ultimately, my job down there was to gather a handful of components and build a robotic teddy bear. His name was Vladdy and he seemed like a terrible jerk. After tracking down the pieces required to put him together, he came to life and bemoaned my inability to speak. We became uneasy companions in the moments before the preview came to a close.

The preview build ended a bit abruptly. After Vladdy berated me, a handful of cornmen appeared and told me that I needed to “hit the showers.” For what reason, I can’t be sure, but if I had one takeaway from Maize, it’s that things are always weirder than they seem.