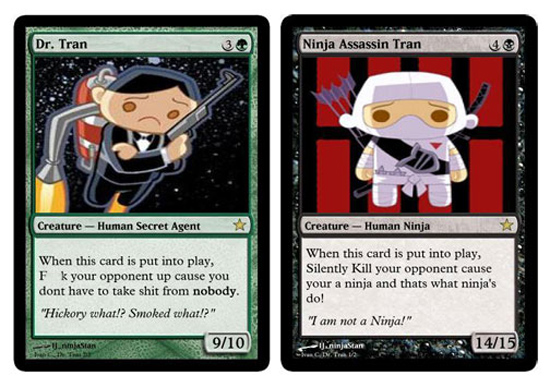 Sadly, the cards above me are fan-made and not real Magic cards, or otherwise I might have kept playing after high school. Still, every time I see a Magic card I can’t help but think that it used to be fun back in the day to whip guys at the game just to see the look on their faces. Fear my blue/white deck, noobs!

Good news for anyone that shares those memories: Magic: The Gathering is coming to Xbox Live (and also to PC, but that isn’t really new news, as a successful version of Magic:Online has been around for some time.) Stainless games will handle its development for XBLA, while Mind Control will handle its development for PC and Mac. I have to admit I am excited — as much as I enjoy Culdcept Saga, I think Magic could appeal to fans of that and possibly even draw in new fans that never played it in its heyday.

No dates yet, but we will bring you more updates as they come. I hope Serra Angels are playable cards. Nostalgia! Press release after the jump, naturally.

WIZARDS OF THE COAST EXTENDS ITS MAGIC: THE GATHERING IP TO MULTIPLE PLATFORMS

RENTON, Wash.–February 18, 2008 — Wizards of the Coast (WotC), the leader in strategy hobby collectible trading card, board and role playing games, and a subsidiary of Hasbro, Inc. (NYSE: HAS), today announced its plans to extend the Magic: The Gathering® franchise to gamers on Microsoft’s Xbox 360 Xbox LIVE® Arcade and the PC through partnerships with Stainless Games, Ltd. and Mind Control Software, Inc. Stainless Games will develop a game using the Magic: The Gathering IP for both Xbox LIVE Arcade and the PC, while Mind Control will develop a game for the PC and Mac.

“We’re excited to bring the Magic brand to new platforms and give our fans new ways to experience this great property,” said Jared Gustafson, Brand Director for Magic: The Gathering at Wizards of the Coast. “It’s partnerships like these that will advance the strategy games category and transform it to meet the needs and desires of today’s digital gamers.”

Magic: The Gathering, introduced in 1993, is the premier and original trading card game that inspired an entirely new game genre. Combining the dynamics of a card game with the excitement of trading and collecting, MagicTM offers fun for casual play, as well as the option of highly competitive tournaments. Magic: The Gathering currently has a thriving online edition (Magic Online®) made up of more than 350,000 active accounts. The game allows gamers to collect and trade virtual cards, build the perfect deck, get help from mentors, find opponents at all skill levels, and compete for prizes every day without ever leaving the comforts of home.

Specific details on the games Stainless Games and Mind Control will develop using the Magic: The Gathering IP will be announced at a later date.