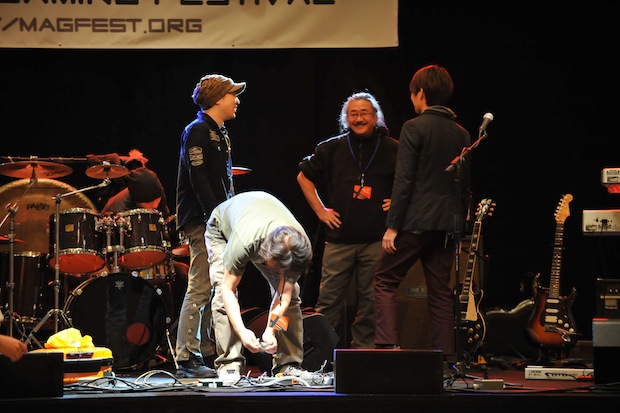 I heard a great story today from MAGFest director Dominic Cerquetti about how a Nintendo Entertainment System power adapter and a bit of technical knowledge saved the headlining concert last night.

Special guests Nobuo Uematsu and his band, Earthbound Papas, were at rehearsal yesterday afternoon practicing, and found out there that they were missing proper adapters for their guitar pedals for the concert. It turned out that no local stores — not even Radio Shack — had what was needed to power this essential gear. This put the show’s staff in a rough place on the night of their biggest concert ever.

They put out a call across the event for every AC adapter available, sending their staff to every corner of the convention center and hotel. It turns out that the show’s game room had plenty of adapters, and from reading voltages from units found that a NES AC adapter might be a match. The staff called in their electronics guru to the stage, where found himself actually soldering and adapting the NES plug to work with the band’s gear as they practiced Final Fantasy VI battle song “Dancing Mad.”

As the song wraps up, with its majestic ending guitar solo, the technician finished modifying the adapter and was able to present it to the band.

Cerquetti explained, “With that, the Earthbound Papas are powered by an original AC Nintendo power brick. We all lost our sh*t, man.”

The entire concert went off without a hitch, powered by a Nintendo Entertainment System power adapter.