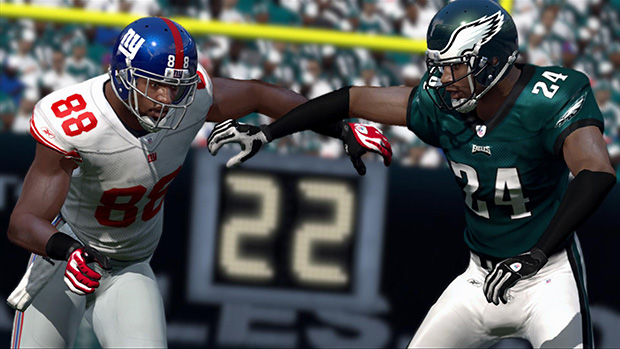 The end of the NFL lockout in late July kicked off the league’s usual flurry of offseason personnel moves (trades, signings, etc.), except this time, the lockout caused the free-agency period to be compressed into the space of a few weeks. Come September, many familiar faces will be suiting up in new places, including cornerback Nnamdi Asomugha (formerly of the Oakland Raiders, now of the Philadelphia Eagles).

The Madden NFL 12 demo came out on Monday, so by this point, EA Tiburon has almost certainly finalized the on-disc rosters. I spoke with Madden ratings czar Donny Moore at a recent press event in New York City, and asked him what the development team is doing about the numerous roster moves so close to the game’s release.

Moore told me that Tiburon is tracking every roster change, and will issue a day-one roster update to bring the game current. The cut-off for changes will be pretty damn close to launch day, too — according to Moore, the team needs only a few days to ensure that there aren’t any kinks with the update. (Of course, Tiburon will also provide regular post-release roster updates.)