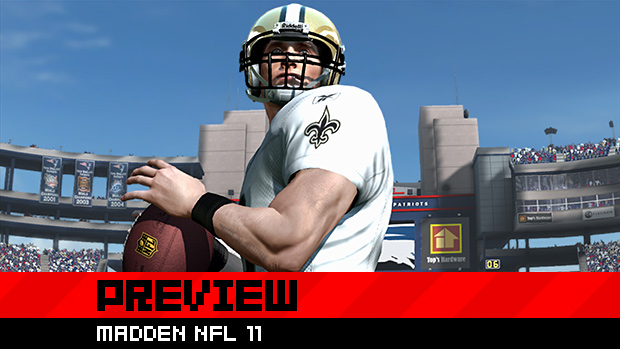 When I sat down with Ian Cummings, the creative director of Madden NFL 11,at an EA Sports press event in New York City last week, I asked him about the focus of this year’s game. The first thing out of his mouth was the game’s tagline: “Simpler. Quicker. Deeper.” Cummings explained that the development team at EA Tiburon pulled data from all the games of Madden NFL 10 that users played, and discovered some “alarming” statistics: namely, that the average game took more than 60 minutes to complete.

Of course, if you’ve played a game of Madden in the past decade, you already know that — and chances are you’ve simply accepted it as a fact of life. This year, though, EA Tiburon has managed to slice that time in half by simplifying a major, time-consuming element of the game: playcalling. But how do you pull off such a feat without dumbing the game down for the legions of Madden enthusiasts who memorize their favorite teams’ playbooks?

Read on to find out. 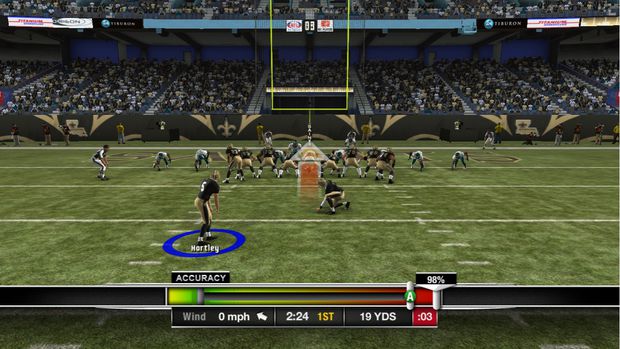 Each of the 32 NFL teams has its complete playbook represented in Madden. Cummings gave me another startling statistic: while each playbook has, on average, 350 plays, gamers tended to stick to a mere thirteen of them — that’s only 3.7%. Most folks have their own “money” plays — the ones that they go to when they absolutely need to pick up some yards — and they might have a short list of standbys as well. But those plays probably span a small cross-section of the entire playbook; the game doesn’t really encourage you to (or demand that you) explore the playcalling screen.

Having established that playcalling in Madden is flawed, what could EA Tiburon do to fix it — and make it more realistic? After all, as Cummings noted, a real coach doesn’t flip through hundreds of plays in the forty seconds that he has to pick one; instead, all the plays at his disposal are broken down by situation — for example, he might have four different plays that he likes to run on 2nd-and-short, and he’ll choose one of them. Tiburon’s solution to the playcalling problem is a complete redesign called GameFlow. 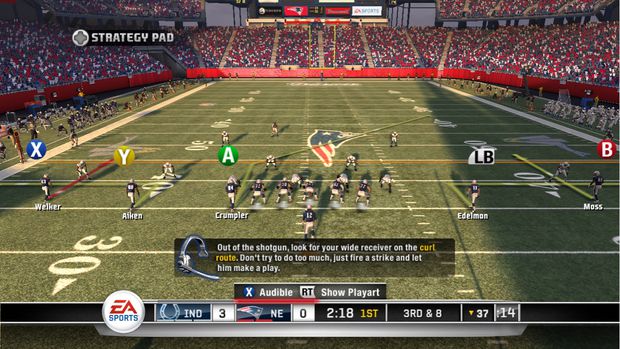 GameFlow takes playcalling out of your hands — “the coordinator is calling the plays for you,” said Cummings. Instead of fumbling through formations in the playcalling screen, you simply hit A (X on the PS3), and the computer selects a play for you based on the situation. But GameFlow isn’t merely “Ask Madden” in disguise; it’s a brilliant revamp of a system that’s been around for so long that you probably didn’t even think it could be done better. In one stroke, it vastly streamlines and shortens the process of playing a Madden game, while incorporating real NFL football in an unprecedented way.

In designing GameFlow, Tiburon looked at NFL game film from the 2009 season to determine each team’s playcalling tendencies. From that data, they created a bank of plays for each offensive situation you might find yourself in. Say you’re playing as the Colts, and it’s 1st-and-10. If you hit A/X to use GameFlow, the computer will pick from a selection of plays that the Colts actually tended to run on 1st-and-10 last year. In addition, every play in the game (offense and defense) has a corresponding voice-over that explains what it’s designed to do, or what to look for. Of course, if you’re scoffing as you read this, fear not: you can always press X (square on PS3) to delve into your full playbook, just like the old days.

But Madden 11 even takes the extra step of encouraging old-school playcallers to use GameFlow by including a complementary “gameplanning” setup. If you shudder to think of the CPU picking a play for you, then you can go in and customize the banks of plays yourself, so GameFlow will be choosing from your list of plays. For example, if you decide that you don’t like what the Giants called on third-and-short in 2009, then you can set one to fifteen plays that you want GameFlow to pick from in that situation. Since you’re likely to have preferences among that list of plays, gameplanning includes an iTunes-style five-star weighting system — a play with a 4.5-star rating will be chosen much more often than one with two stars. The same setup applies for defense, only the situations correspond to the formation in which the offense is lined up instead of a particular down and yardage. Best of all, you can use your gameplan online. 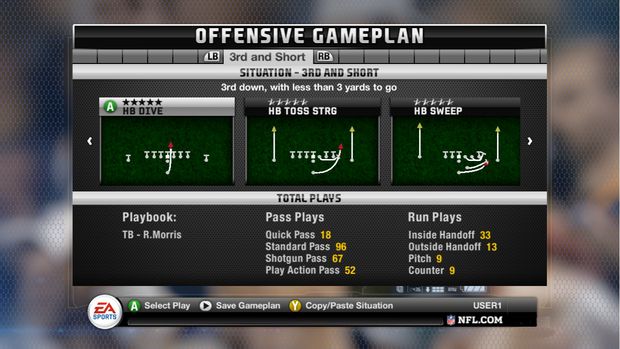 I’ve discussed GameFlow in depth, but it’s just one of a host of improvements and additions to Madden 11. “We scrapped our entire locomotion engine and rewrote it,” said Cummings, launching into a discussion of the much more realistic movement of the players in this game. The agility rating means something in Madden 11 — players have momentum, meaning that they’ll have to actually plant a foot before switching their direction. And now, instead of simply going for the guys with 99 speed, you’ll want to consider their acceleration, too: a lower acceleration attribute means that a player will take longer to reach his top speed, which gives defenders a better chance of catching up to him before he takes off for the end zone.

Along with the all-new movement system is a new dual-stick control setup for ball carriers. Tiburon took inspiration from EA Canada’s NHL and FIFA games, stripping out a “turbo” button and mapping specific moves to the right analog stick. The upper half of the right stick controls your upper body, while pushing left, right, or down will affect your legs. By pushing upward, you can lean forward to “truck” a defender (like you’d do with, say, Brandon Jacobs). You can then roll the stick to the right or left to lean in those directions, which will avoid the brunt of a hit.

The more impressive motion comes from the new “legs” controls, though. Madden 11 finally gives you the ability to approximate the dirty, ankle-breaking, how-the-hell-did-he-do-that moves of an agile running back such as Chris Johnson. Flicking the RS right or left will plant the respective foot, and since your player will plant as quickly as you can move the stick, you can “bounce” on your feet, shifting your weight left and right until you decide on a direction and make one last cut to go there. Combine this with spin moves (push downward, then roll left or right), and you can make defenders look silly. The dual-stick setup in Madden 11 allows for more nuanced ball carrier control than I’ve ever seen before. (Note: Tiburon is bringing both the new locomotion engine and the dual-stick controls to NCAA Football 11.) 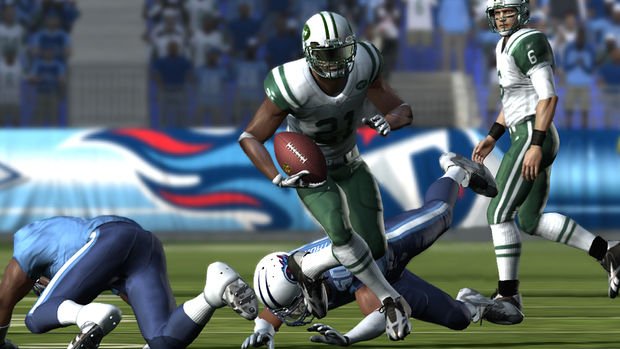 Tiburon has also made a couple of other upgrades to the gameplay, fixing issues that have plagued the series for years. At long last, they’ve implemented sideline catching AI, so receivers will do their best to keep their feet in-bounds while holding onto the ball. Feel free to bring fade and out routes into your repertoire this year! The sight of a receiver dragging his toes brought a smile to my face. In addition, Cummings told me that “run blocking has received a major overhaul.” Cummings showed me a visual representation of this: you’ll see the assignments of your offensive linemen laid out in the pre-snap play art. And when I ran a sweep, I noticed that my lead blocker who was pulling to the outside no longer peeled off his man and left him free to tackle me; instead, he remained engaged in a block.

Madden 11 also looked better than its predecessor, and art director Mike Young explained that the team hadn’t even put in its improved lighting model yet. (As you can see, they’ve also made an effort to include more accurate player faces.) Not only is Tiburon building on the success of Madden 10, they’re doing what gamers have always demanded of them: going out on a limb and innovating. GameFlow is a big risk — as Cummings noted, “It’s kind of a radical change.” That’s the type of iteration that keeps a long-running franchise fresh and at the top of its game, and Tiburon looks to be doing it right.