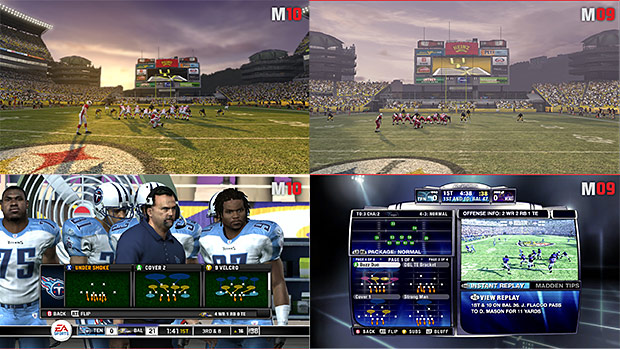 In case you haven’t kept up, EA Tiburon has made numerous visual improvements to the Madden series with Madden NFL 10. They’re justifiably proud, so they’ve put together a bunch of comparison shots showing off the myriad differences between the two games.

Above, you can see two separate comparisons (Madden 10 is on the left, and Madden 09 is on the right). The top set was taken at dusk during a Cardinals-Steelers game at Heinz Field, and the set below it provides images of the playcall screens from the two games. In the first group, notice the obvious upgrades to the game’s lighting engine. And take a look at the revamped play select screen, which was changed to show the on-field action.

Obviously, these images are much better viewed at full size; you can check out nine HD-res comparisons on the Madden 10 Web site, as well as one more that was tweeted by Michael Young, the game’s art director. And you’ll be able to see the differences for yourself when Madden NFL 10 launches next Friday, August 14th.