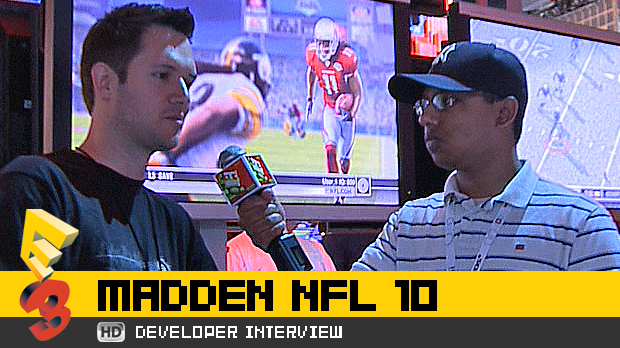 One of the major new features in EA Sports’ Madden NFL 10 is online cooperative play — in fact, it’s new to the Madden franchise as a whole. It’s a pretty big deal; until now, you could only play competitively online, and losing to an experienced player by five touchdowns in the second quarter is no fun.

But don’t take it from me. The game’s Lead Designer, Ian Cummings, was gracious enough to speak with me at the EA booth on the E3 show floor. He explained why online co-op is so important, and he also discussed numerous other improvements and additions in Madden NFL 10. That includes 32-player online franchise and the much-heralded Pro-Tak animation system, two more firsts for the series.

Hit the jump to check out my interview with Cummings, which was shot and cut by our resident video wizard, Rey Gutierrez. Sadly, he didn’t forget to include the long touchdown run that I gave up to the Eagles’ Brian Westbrook. *sigh* For more on Madden NFL 10, which launches on August 14th, check out my preview from April. (I’ll soon be putting up some hands-on impressions as well.)