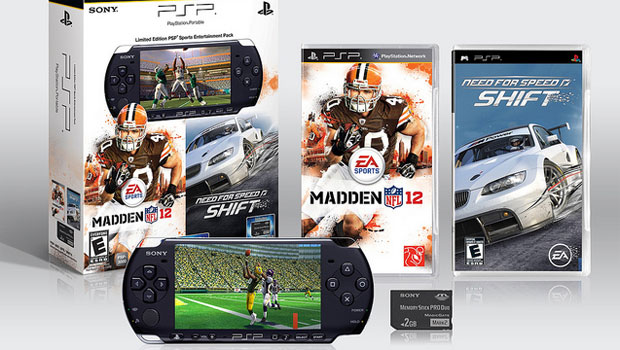 It’s that time of year, folks. What am I talking about? Oh, only when Sony tries to convince people they should buy a PlayStation Portable so they can play Madden NFL on it.

They usually do it with a bundle, and — shocking! — a bundle has just been announced. Starting on August 30, you’ll be able to buy a PSP-3000 packed with Madden NFL 12, Need for Speed SHIFT, and a 2GB Memory Stick PRO Duo. You know, the usual. This is what, the 79th PSP bundle now? We know the drill.

It’s going to run you $159.99, which is actually not a bad deal if you’re into tackling and cars. A lot of folks give Sony a hard time when it comes to the PSP, but it’s not entirely warranted. Surely, it’s not the perfect handheld, but there’s still a solid back catalog of games readily available. So maybe yeah, it’s time to buy a PSP… right before Sony launches the Vita.

Oh hey, did I mention you can play Madden NFL 12 on this thing?