Before last Thursday, the last time I saw Arizona Cardinals wide receiver Larry Fitzgerald in person was at the unveiling of the Madden NFL 10 cover, which took place in April 2009 in New York City’s Times Square. “If I’d asked you before today — April in New York, or February in Dallas: which one would you have guessed would be colder?” I put that question to Fitzgerald while we were both freezing our fingers and toes off at the Coke Zero Black Carpet outside Madden Bowl XVII in Grapevine, TX, with the temperature in the mid-20s and a bone-chilling wind making things worse.

“I would’ve definitely said April in New York,” he told me with a grin. “I mean, this is bizarre.”

If you’re suffering from football hangover, now that the big game has passed and an impending lockout looms ominously over all our heads, don’t worry: just retreat into the world of videogames. EA Sports’ Madden games let you live out your football fantasies, but the pro athletes themselves enjoy the games, too, and EA brings the two together every year at the Madden Bowl. 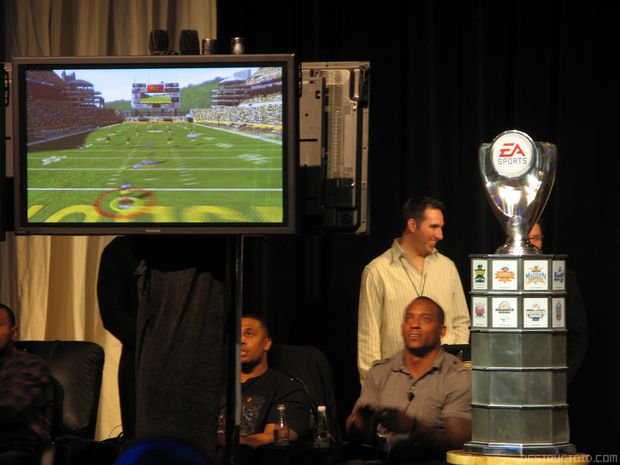 The Madden Bowl is an annual Madden tournament in which football players try to bring each other down on the virtual gridiron. It’s always a great time — even the snow, ice, and below-freezing temperatures in North Texas couldn’t stop athletes and a few celebrities from making their way out to the party. Access Hollywood correspondent Maria Menounos walked by the press on the Black Carpet, commending us all for braving the cold to interview the stars. Rapper Big Boi, who later performed at the event, is a big Madden fan, and has been for “over ten years.” He and his buddies are so serious, in fact, that they often wager on Madden games on the tour bus.

Musician Cee-Lo Green, who took the stage after Big Boi, told us that while he doesn’t play videogames very much, his son does, and is “showing me the ropes.” When I asked him about the games his son enjoys, Green told me that his son is “a soldier […] he plays Black Ops and stuff like that.” He’s not the only one for whom Madden is a father-son bonding experience: Atlanta Falcons tight end Tony Gonzalez said that he often plays the game with his ten-year-old son, who “kicks my ass” regardless of the team that Gonzalez picks (his son plays as his father’s Falcons). 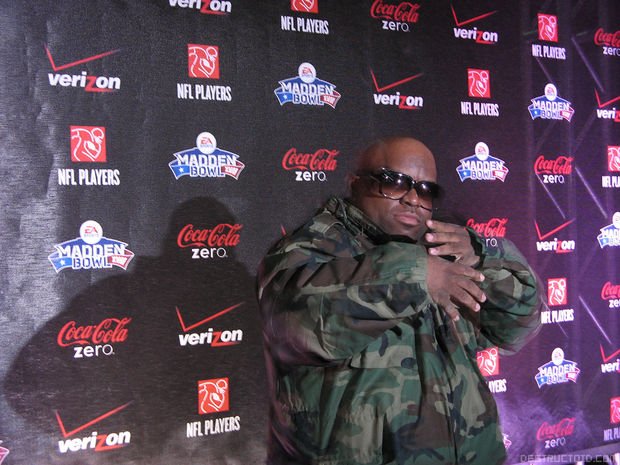 Of course, most athletes are concerned about the Madden development team’s evaluation of their talents: their in-game ratings. One football star in attendance asserted that everyone cares, even if they don’t want to admit it. But Tampa Bay Buccaneers quarterback Josh Freeman, an up-and-coming star who has played two years in the league, told us that his Madden rating isn’t that much of a big deal to him (his original Madden 11 rating was a 77). “I can take more pride — if my rating’s low — in going out and beating someone anyways,” he explained. “It’s one of those deals where [I] have to earn the respect of Madden, of the guys at EA Sports. […] I’m hoping this year catapults me into the low 90s, at least.” I was surprised by his team choice in the game — I expected him to say that he plays with his real-life team, but he said that he always goes with his hometown team, the Kansas City Chiefs.

Patrick Willis, who is a linebacker for the San Francisco 49ers and was slated to play in the tournament, expressed trepidation at the special format this year, which used the Online Team Play feature in Madden 11 to set up 3-on-3 co-op games. “I’m nervous,” he confessed, after explaining that he hadn’t yet tried online co-op himself, although he plays a lot of Madden and is a force to be reckoned with — Willis was the runner-up in last year’s Madden Bowl to Jacksonville Jaguars running back Maurice Jones-Drew. 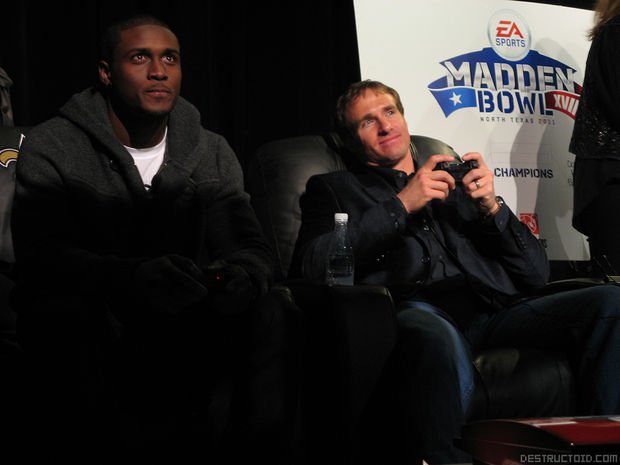 As it turned out, Willis’ worries were unfounded. The New Orleans Saints team in the tournament — which consisted of starting quarterback (and Madden 11 cover athlete) Drew Brees, halfback Reggie Bush, and backup quarterback Chase Daniel — knocked out Jones-Drew and his Jaguars teammates in the very first game. Willis eventually joined up with Menounos and Cincinnati Bengals wideout Chad Ochocinco to take on the Saints team in the finals. The patchwork team played as the Colts in a reenactment of last year’s contest for the Lombardi Trophy.

The Madden Bowl championship came down to the wire. The Colts were up 14-7 late in the fourth quarter, but Daniel led the Saints down the field for a touchdown with 37 seconds to go. In a no-guts-no-glory move, they decided to go for a two-point conversion and a last-second win, instead of merely kicking the extra point to force overtime. But the defending Lombardi Trophy winners’ hubris was their downfall, as the two-point attempt failed and the Colts ran out the clock for a 14-13 win.

Menounos became the first-ever female winner of the Madden Bowl, and said afterward that she hopes her victory will “perhaps pave the way for other females to participate in the event in years to come.” A smiling Willis heaped praise on his partners, saying, “It was a true team effort,” as Menounos hoisted the trophy above her head. 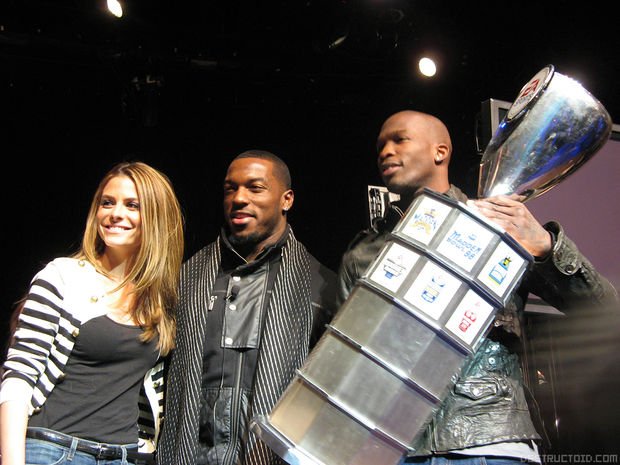 After the conclusion of the tournament, the party kicked off with Big Boi and crew performing Outkast classics like “So Fresh, So Clean” and “Ms. Jackson.” The guys even invited a few lucky women to join them onstage for some dancing. Next up was Cee-Lo, who got the entire crowd to sing along to his Grammy-nominated hit, “Fuck You.” Guest DJ Biz Markie spun long into the night as the party died down. By the end of the night, a light snow was falling, as if to confirm that the festivities were over. 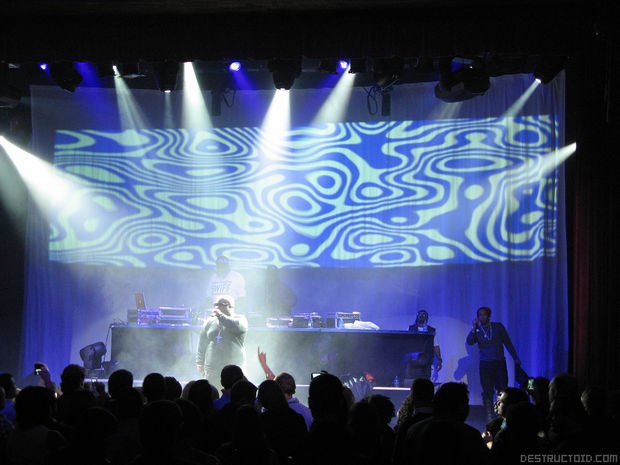 [Full disclosure: Coke Zero — an official sponsor of the Madden Bowl — provided my flight to Dallas and accommodations for my stay in the area, but did not have any bearing on this editorial content. Aside: Coke Zero is a beverage that I happen to enjoy. -Samit]