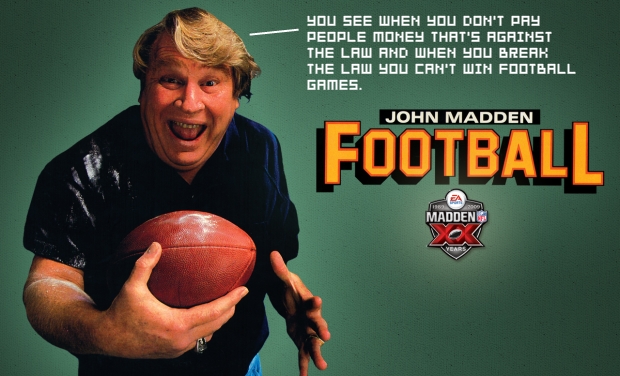 Hold on, let me put on my Samit hat.

Fresh off the news that he will be retiring, John Madden is back in the news, but this time he probably won’t be celebrating anything. Former Cleveland Brown Bernie Parish says that a group of retired NFL players will be going after EA and Madden for their part in using the player’s likenesses without compensating the players in any way. The group of players just won a $28 million lawsuit against the NFL Players Association which alleged that the NFL union recommended that EA “scramble” the players’ likenesses so that they wouldn’t have to pay the players or compensate them.

Parish now says they’ll be going after the other parties in the game of screwing people out of money. “The retired NFL players who were used in Madden EA video games will be suing Madden and EA for using us in those games without compensating us,” he wrote. “We probably will not use … the attorneys who obtained a $28.1 million verdict for us against the NFLPA for ‘scrambling retired players identities’ in those video games. The jury found it a ‘grossly fraudulent’ action taken so they wouldn’t have to pay the retired players. … In my opinion, Madden should have been included in our licensing suit against the NFLPA and so should EA.”

The only thing keeping them back is a bit of money so Parish is asking all the retired NFL players to set aside $1,000 from their previous winnings to fund the trail. Considering that many of the players from that time were not making a lot of money I believe they deserve it.