In case I didn’t cover all the bases well enough, the demo for Madden NFL Football 2009 hit both PSN and Xbox Live yesterday. I took the glorious opportunity to download the title on both platforms. I have to say, I’m quite happy with what I am seeing thus far.

Last year, Madden was all about the individual. Players got new “weapons” tags reminiscent of NFL 2K series. The circular icons underneath the player’s feet allowed people to readily recognize what player was best at, regardless of skill position. This year, it appears that the Madden franchise is taking a slight step back, and then taking a giant leap forward.

Hit the break for my impressions. 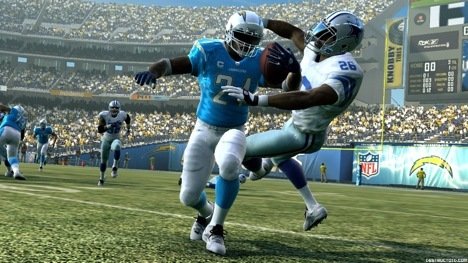 When you boot up the demo, John Madden immediately greets you. Much like the Wii’s upcoming storage unit, he is presented as a hologram. The hologram John Madden is strangely, not as annoying as previous incarnations in the series. This time around, the man has some pertinent things to relay. John reveals that Madden 09 will adapt to your play level according to some weird virtual reality tests.

The tests conclude your Madden IQ, which is the means by which the game figures the player out. After Madden tells you what’s up with the system, you will be thrust into a Tron-esque interface. The virtual reality thing gauges your running, passing, tackling, and pass-defending prowess individually. According to how well you do in the tests, Madden 09 scales the AI accordingly.

The big turn off here is the way this system looks. What is the point of assaulting me with these colors? The entire time I was going through all the varying practices, I felt as though I was playing a Metal Gear Solid VR mission. Except instead of guards and exclamation points, I had really bright orange passing routes and blockers. 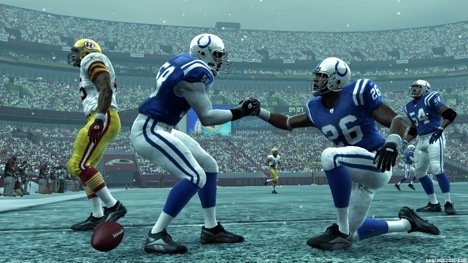 The running game looks to be much improved at this point, but not quite as sophisticated as NCAA 2009. The jukes, spins, and stiff arms look much more believable and are incredibly fluid. So fluid, in fact, it appears as though expert players of the franchise will be able to run through anything a defense puts up. My little VR guy tore up every play with ease as I plowed through defenders. The simulation tells you what move to use right before the defender reaches you, but you can easily ignore the prompts, stick to your blockers, and hit the endzone without assistance. The passing operates much the same as last year, although it appears that receivers stick to their routes much better. I had great success tossing the ball around, but cornerbacks still predict routes with the same cruel efficiency as previous iterations of the series.

The biggest problem that I had was on the defensive side of the ball. The last two Madden IQ challenges put you in the shoes of a defensive player. The first is a tackling drill, which can be very disorienting. Several new tackling options are actively being promoted this year. Much like the running challenge, the game prompts you to use a specific tackle to catch the running back. Unfortunately, this is way harder than you would expect. Blockers still stick to you like glue and home onto you like missiles. The tackling animations are spot-on, and the impact of players colliding is a much more satisfying experience than last year. As for pass defending, the game goes into slow-motion when the ball gets close to the defender and the receiver. I cannot ascertain at this point if that is restricted to the VR stuff or the full game, but it’s slightly annoying. I prefer my Madden fast, just like my metal. 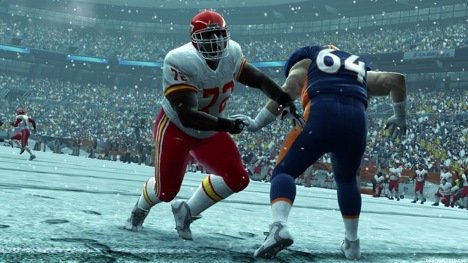 After you get your Madden IQ, the next and final step of the demo is the new “Madden Moment” game mode. It puts players in the shoes of the Giants in the last minute of play during the SuperBowl. Sadly, David Tyree is nowhere to be found. Again, I wasn’t able to ascertain if the Madden IQ actually did anything to the game, and perhaps that’s a good thing. The game was challenging, but remained accessible despite my amazingly high Madden IQ. Hopefully this year, I won’t be able to put up 60 plus on the Lions.

Maybe it was because I had just stepped out of the virtual reality simulation, but the turf and player models really stuck out to me when playing the Madden Moment portion of the demo. It looks as though Tiburon finally figured out that players aren’t all built like semis or kickers. The turf is extremely detailed, and almost scary in its realism on a HD set. The game still runs fluid and reacts to your button presses very well. One of my biggest gripes about last year’s version was how often my QB refused to throw the ball. I was glad when Eli reacted to my every effort to get the ball out before a defender ate him for breakfast. Sadly, you only get to play the Giants in the situation mode, so it’s tough luck that I couldn’t try out the defense in a full formation.

Overall, I’m excited about the promise of the next Madden. I was initially worried that the new adaptive mechanic of the game could ruin it, but it appears to match up to you fairly well. I thought the Tron graphics were disappointing, and I wish the running game was still a little bit harder to pull off. Every run really shouldn’t be a seven-to-eight yard gain. The great thing is, this was just a demo and Brandon Jacobs is a big, nasty man. Technically, both versions ran the same, although the PS3 version stuttered for a few seconds upon initial loading. I have a feeling that will be ironed out quite easily upon the August 12 release when PS3 owners download a portion of the game to their HD.