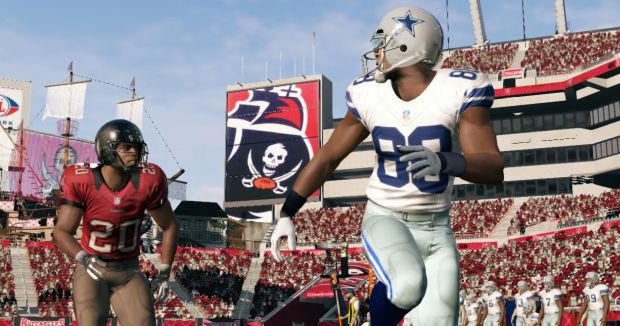 If you read my E3 preview of Madden 13, you know that I’m tenuously excited for it. If you haven’t, well, I’m tenuously excited for it. The reason behind this cautious optimism is that Madden has finally implemented a physics engine in this latest installment, noticeably changing the way it feels. Pre-canned, boring tackle animations are gone, and bodies flop about like their spines are made of jelly now. There’s a heightened sense of excitement when you know that one broken tackle or player unexpectedly maintaining balance after a hit can actually mean the difference between a big play, or a forgettable one.

Accordingly, it’s slightly disappointing that Madden 13 Wii U, which is launching alongside the new system, will be without this physics engine. Instead it will be playing on the older, established framework that has begun to grow stale for many. Though it will feature other Madden 13 additions, such as the CBS themed graphical overlay and commentary, and the touted Connected Careers mode.

Madden 13 for the Wii U isn’t without its own console specific charms, however. The touch screen looks to make play calling a smoother process. More importantly, being able to easily audible into custom hot routes that you can literally draw up is a cool addition, and a great use of the Wii U hardware. Similarly, being able to quickly reassign man coverage with a few taps, or to reposition zone coverage by dragging the coverage area can be an incredibly useful tool in the right hands.

Madden fans, do you want get the Wii U version for these cool perks or would you rather stick with the PlayStation 3 and Xbox 360 version to see what the new engine is all about?