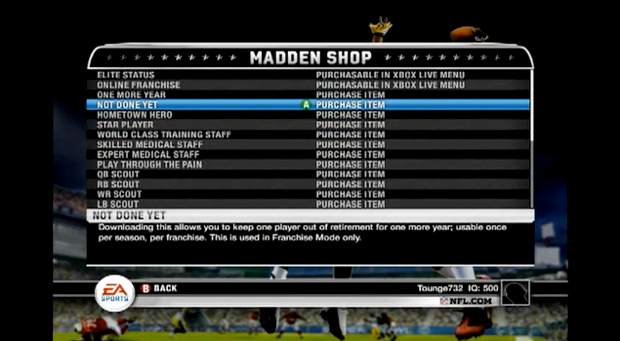 While Bethesda may have backed off after horse armor, Electronic Arts continues to keep micro-transactions at the forefront of its downloadable content strategies. The latest title supported by a bunch of ticky-tacky DLC is Madden 10.

A YouTube video has surfaced displaying the megaton of content that will be offered when the game hits retail in a few days. Most of it only affects Franchise Mode. You can download advanced trainers, staff, and scouts as well as a plethora of game-breakers such as temporary boosts to player and coaching statistics.

It may sound like overload, and it is in many ways it is, but don’t fret too much: these micro-downloadables aren’t malicious. As far as we can tell, EA isn’t selling modes or other frill content players are accustomed to receiving with the purchase of a core Madden game.

The one offensive scrap of optional content we’ve spotted is something called “Elite Status.” IGN covered the content (400 Microsoft Points) moons ago. It’s a download geared towards good players, adding a harder difficulty setting and special online lobbies just for them.

Madden 10 will be a success — there’s no doubt about it. But we wonder how these micro-transactions (whatever the price) will sit with NFL-starved consumers. Guess we’ll to wait and see.