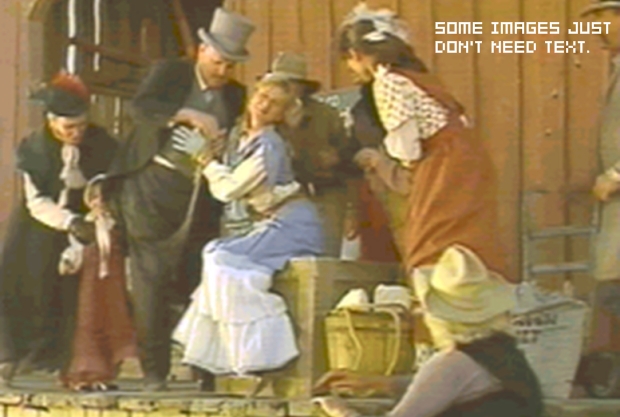 I am almost positive that my glasses are beyond RetRose tinted on this one, but I’m going to say it anyway: Mad Dog McCree was the greatest arcade light gun game ever made. Here me out here. Not only was the game a light gun game (a basic requirement to be the best light gun game ever made), but it was also live action! You shot some real person and then he’d fall after the proper cinematic loaded. It was awesome! It was like being in a movie I tell you! And the acting in these things was incredible.

Plus, at the crappy arcade that was attached to the Putt-Putt golf course I went to it was the only light gun game around. That instantly catapulted it to a far better standing than any of the other light gun game in existence. That place also had the 3D holographic game. Did you ever play that? Soooo cooool. I’m sure it had a name too. Man, arcades were awesome. Oh, and remember how in Mad Dog McCree you could shoot a guy on a balcony and then he’d fall off — classic western.

Ummm, there was a reason I started this post… oh, yes! Mad Dog McCree and most likely its sequel are coming to the Wii in the form of Mad Dog McCree: Gunslinger Pack. The ESRB has a rating for it and everything. Now I can have the feeling of the arcade at home and all I have to do is figure out a way to charge people 100 tickets for these little plastic Army Men I have sitting around. Since I wasted most of this space on stream of consciousness writing you’re going to have to hit the jump to read the ESRB’s description of the game.

This is a first-person shooter featuring live-action scenes instead of traditional animation. Set in the Wild West, the game allows players to engage in gunfights with bandits, rescue innocents, and shoot objects for points. Players use crosshair targeting to fire their gun at various outlaws who yell, flail, and crash through the scenery. In once scene, a character is depicted lying by the side of the road with several arrows sticking out of his body. There is red blood on the shafts of the arrows. In another scene, a woman says to the camera, “You’re my type, everyone is,” while a man in his long johns (i.e., underwear) moves past her. There is also a reference to “dirty peeping toms” and occasional depictions of women with exposed cleavage. The game includes attempts at slap-stick humor, including a scene in which an outlaw falls face-first into a pile of animal dung. During the course of the game, characters can be seen handling bottles of alcohol in saloons, slurring their speech after drinking from a flask, and holding unlit cigars.