Ready for Street Fighter IV? No you aren’t. Why would you lie to yourself like that? It’s not like you have an SFIV arcade cabinet sitting in your den, waiting for quarters from a second player.

Don’t worry, you don’t need it. Because the next best thing to owning an actual expensive arcade machine is having all the parts in between the giant cabinet. Like the actual joystick and buttons.

That’s what Mad Catz is offering in their Official Street Fighter IV FightStick: Tournament Edition, a carbon copy of the actual Japanese arcade seen across all of Japan and select areas worldwide. No, scratch that — this one is better. 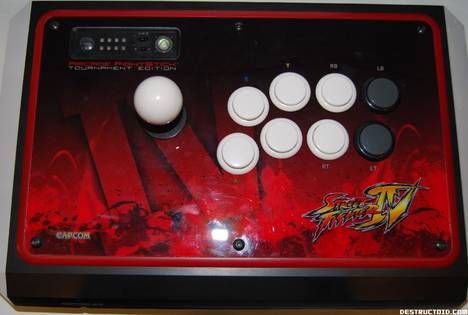 I know what you’re saying. “Better? I haven’t even played the arcade version!” While Street Fighter IV hasn’t yet made it to the so-popular-it’s-a-sport phase, it relies on the same principles as previous Street Fighter titles (as you can see in our review). That means that the controls are identical, so the controller you use will have a big impact on how well you play. And getting a controller just right has taken years.

So it shouldn’t come as a surprise that the Tournament Edition arcade joystick and controls are made by Sanwa Denshi, the renowned Japanese company that makes the best joysticks in town. Chances are they made the joysticks and buttons for the arcades you remember playing back when arcades were easy to find. Beyond that, Mad Catz and Capcom went to the best Street Fighter players and had them help make the controls even better.

After extensive (and we mean extensive) testing, the only complaint about the quality of the Tournament Edition is that it’s too good. Mistakes you make are your mistakes; blaming the controller only makes you look like an idiot.

But that’s just the start. The Tournament Edition also comes with eight buttons instead of six, so everyone has both Japanese- and American-style arcade buttons, which are clearly labeled and impossible to miss. 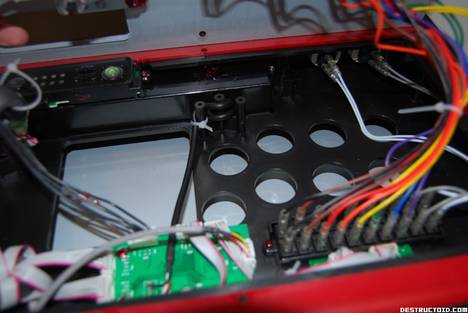 The TE includes a turbo function for all eight buttons with two speed settings. All of it is stored on the FightStick, so it’s easy to program. Whenever any button is set for turbo, an indicator on the top left corner of the TE lights up red, so players know what is set to turbo and what isn’t.

In that same corner, a lock switch shuts off use of the turbo and Xbox Guide/PS Home buttons, because anyone who’s played a fighting game knows things can get rough, and fingers and hands slip. No need to worry about it here; just flip the switch and press it all you like — no more pop-up windows or menu screens.

The last switch is for selecting the joystick to read as either the D-pad, left stick or right stick. Mad Catz made the correct assumption that owners will want to use this controller for other games. While it’s theoretically possible to play any game with the TE, playing Call of Duty 4 and switching sticks is like playing Halo with a Guitar Hero controller — possible, but you have to be drunk to enjoy it. Arcade titles, on the other hand, can be much better with this controller than the standard pad.

Let’s imagine, however, that you are one of those obsessed players who must have everything customized. That Ben Heck knows your credit card number by heart. Or maybe that when someone tells you they bought a Hori arcade stick, you have to down a bottle of beta-blockers so your blood pressure doesn’t pop everyone’s ears in a 50-foot vicinity. Nothing wrong with that (well, almost), since the TE has you covered, too. 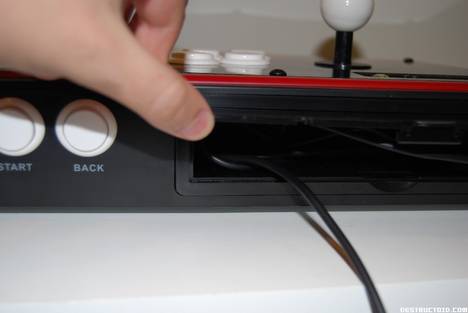 Open up a few screws and the FightStick is completely customizable. When I say “completely,” I mean that Mad Catz went out of their way to make it easy for modders to put in custom parts. Any joystick will fit in the socket, the button wires are color-coordinated and labeled, and there’s no soldering required. Anybody can do it. Even the faceplate can be changed, and Capcom is working on new images that can be printed and placed specifically for the TE.

There’s more. The start and back/select buttons are on the top (note — not face) of the FightStick, which is remarkably convenient. There’s a storage space for the 9′ cable, though it’s much easier to take it out than to put it in. The rubber feet on the bottom are removable and, if you have the space, you can screw the TE directly into a table for maximum stability. However, it feels very solid and will work just as well on your lap.

The only real downside to the Tournament Edition is the price. For $150, you could buy two standard Mad Catz FightSticks, four FightPads (with some change) or pay two months of your iPhone phone bill.

It might just be the best consumer-grade arcade fight stick we’ve ever played on. Great feel, excellent control and near-perfect design make the Mad Catz Official Street Fighter IV FightStick: Tournament Edition the must-have controller for Street Fighter IV. Just get a cheaper phone or eat less … or find a way to make your friends pay to play so you can afford it.

Jamez Pikover is a freelance writer whose work has appeared both online and in print, including Strategy Informer, Gameworld Network, and Total PC Gaming. He’s contributing these Mad Catz Street Fighter IV controller articles on a one-off basis, because he loves you, and wants to make sure you don’t spend your money on something you shouldn’t. Be nice.