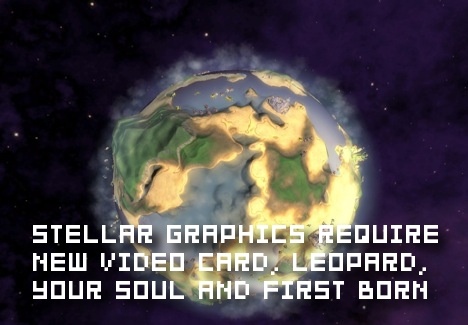 As most Macintosh owners may have realized, not many triple-A titles come to the platform. Although the lack of quantity of feature games has been the classic issue, many Macintosh enthusiasts have been excited about the prospect of sinking their teeth into Electronic Arts’ Spore. Unfortunately, the Macintosh version of Spore costs more than just the retail price – it may cost you a brand new Macbook.

GhostRazor has discovered that any Macbook made earlier than late 2007 is not capable of running Spore. It’s all intertwined with the rotunda of graphics cards that Apple has used over the last couple of years. Spore doesn’t support the GMA 950 card that most year-old Macbooks have. Instead, Spore only utilizes the fresh and beautiful GMA X3100.

This is a problem that I ran into after I upgraded from Tiger to Leopard expecting to be able to run Spore just fine. As you can see from this unfortunate message, Spore just doesn’t want to cooperate with me. The only option available to people like myself with a slightly older Macbook is to buy an entirely new Macbook, Macbook Pro, or iMac.

Maxis are already pursuing a very small user base by choosing to develop for the Macintosh platform, so why tighten the circle even further? Doesn’t this seem a bit odd, or should I be upgrading my Mac every sixteen seconds so I can get the coolest Will Wright games?