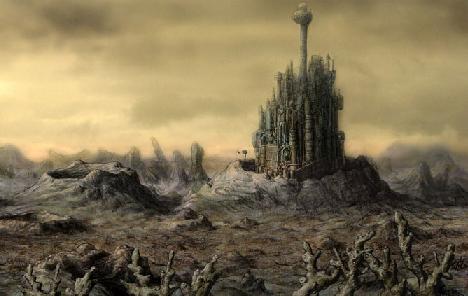 As I walked through the almost empty halls of E for All this past weekend I kept trying to find something, anything to write about. After passing by booths showing off the already released Boom Blox and Wii Play (I’m not kidding), I pretty much resigned myself to the fact that I wouldn’t have that many positive things to say about the struggling Los Angeles based event.

Luckily, at the very end of the first day, I stumbled upon a lonely PC game in the far corner of the IndieCade section.

The tragically ignored game was called Machinarium (from the creator of the incredible Samorost and Samorost 2) and it is easily one of the most promising games I have ever played in my entire life.

Admittedly, the game might not be for everyone — it’s a classic point-and-click adventure game in every sense of the word — but if you adore adventure games (like me!), Machinarium just might be the greatest thing ever.

Hit the jump for a ridiculously long hands-on with the game I, quite frankly, can’t stop thinking about. 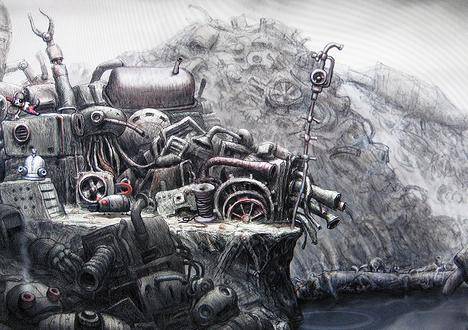 The first thing you will notice about Machinarium is how unbelievably gorgeous the game looks. Every sprite and background is hand drawn in a sketchy, colored pencil art style. Usually games that look this good have shoddy animation, but the characters and backgrounds in Machinarium display stunning, fluid movement. You really have to see the game in motion to fully appreciate its beauty.

Unlike some adventure games, Machinarium doesn’t force the player to have to backtrack and collect a giant array of items to use in almost nonsensical ways. Instead, the indie game works on a screen-by-screen basis. In that regard it is very similar to something like the Wii’s Zack & Wiki: Quest for Barbaros’ Treasure.

In the game you play as a little robot whom the player is immediately tasked with putting back together. After collecting your missing legs in the first section of the game, the cute little robot is able to walk freely around the screen. Once you start to walk around you will immediately discover one of the game’s greatest design choices.

In most adventure games you can click anything on the screen regardless of where your character is located. In Machinarium, items can only be manipulated or collected when your character is standing right next them. While that sounds kind of pointless, it really adds to the challenge.

For example, look at the below screen and focus on the traffic cones on the edge of the cliff. 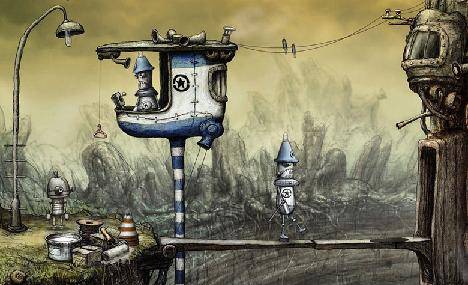 First of all — and this is something I adored right away — all usable items have the same art style as the background. As adventure game fans know, sometimes items in the game world look slightly different than the background. Not only is this distracting, it almost makes knowing what you can collect too easy. Since everything in Machinarium visually blends together so well, figuring out how to solve the numerous puzzles really takes brains.

When your robot character first walks on the screen, nothing can be clicked on. The traditional arrow on-screen cursor does not change no matter what you scroll over. But by walking up to the traffic cones and standing next to them, the cursor changes to a grasping hand and, lo and behold, the traffic cones can be manipulated.

In order to give you a really good idea of how Machinarium works, I think the best idea would be to use one of the screenshots as a virtual guide through part of the demo.

Take the below screen, for instance: 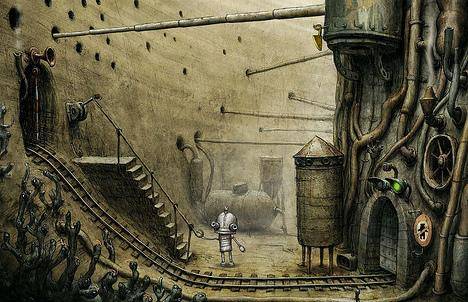 This set piece is the third screen in the game and takes place outside a giant factory.

The object of this puzzle is to figure out a way to open the door to the right and grant your robot friend access to the machine-covered building.

Study the screen for a second just to get an idea of what tools you have at your disposable. As I mentioned before, the game runs on a screen-to-screen basis, so every item you collect is found and used within the same screen – there is no need to carry anything with you or backtrack at all!

If you plan on playing this game (please do!) and don’t want this puzzle ruined please skip ahead to the last couple paragraphs now. If you don’t care, read on and see why solving puzzles in Machinarium is ridiculously satisfying and completely intuitive.

Okay, so the first thing you realize by playing is that the lever at the top of the stairs sends a mine cart full of jewels down the track and into the factory. Unfortunately, when the door at the end of the track raises to accept the delivery, it only stays open for a split second. So how then to gain access?

After walking around different parts of the level, you discover a couple things that can be manipulated: 1) By crouching down, the robot can extend its arm to access the control panel to the left of the door. And 2) when pushing the bottom of the loose railing on the stairs, the bar can be slid up and used to push the mine cart lever from the bottom of the steps.

Even though pushing the lever from the bottom of the stairs is neat it still doesn’t solve anything — the mine cart still races through the door that opens and closes to quick.

The first thing you need to do is play around with that mysterious control panel.

When accessing the control panel two dials are displayed: one with numbers, the other with letters. After experimenting with different settings, you figure out that the different combinations move the giant metal arm into different holes in the wall.

By moving the arm into the right hole, you can climb the stairs, extend the robot’s body up, grab the pole, and shimmy all the way across to knock down the hanging yellow wedge from the large generator.

Once you get this wedge the real fun begins!

My first thought was to place the wedge on the track and try to disrupt the mine cart’s path. My clicking on the wedge and then the track, I placed the item in what I thought was the perfect position.

After activating the lever, the mine cart did hit the wedge and fly off the track, but it kept flipping off the bottom side and off the screen, resulting in the door still opening and closing too fast for me to enter the factory.

No joke, after a good fifteen minutes I had no idea what I was doing wrong.

The puzzles in Machinarium are so detailed and accurate that I finally figured out that I was just placing the wedge on the wrong side of the track. That’s right: you can even place items in specific places at times.

Once I switched the wedge’s position the mine cart derailed, flew off the top side of the track, and crashed into the large generator.

After being destroyed, you can then place the wheels of the mine cart on the track without the cart part, sit the robot on top of them, push the lever from the bottom of the stairs, and watch as a new mine cart emerges and knocks you through the open door and into the factory (whew!).

The few puzzles I got to play through were all this clever and fun to figure out. Sadly, the demo ended way too soon as I truly could have sat down and played the game all day long. It really is that good. 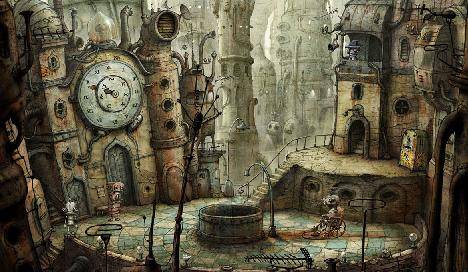 If you are a fan of classic point-and-click adventure game, Machinarium has the potential to be one of the greatest games you will ever play. Not much info is known about its release, but the person at the E for All booth confirmed a 2009 online release and a minimal download price (if any at all!).

Now that I am absolutely obsessed with this game make sure to check back with Destructoid for more information about Machinarium as it becomes available.

Who knew that a random indie PC game at E for All would become my most anticipated game of next year?