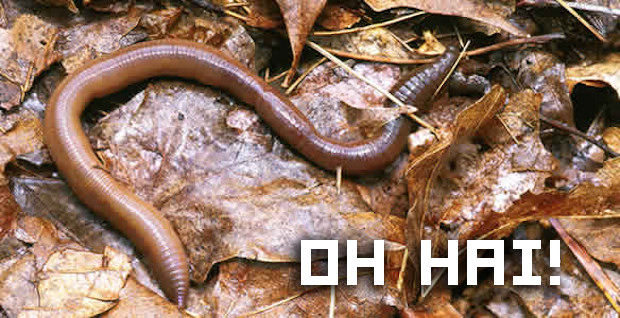 Okay okay, so we gave Lux-Pain a 5.0 in our official review. That doesn’t mean we’re above giving a copy away with a free DS carrying case. Last month as ran a competition which challenged you to acquire a photograph of a worm and then think for it, in a stupid tribute to the malicious brain-altering invertebrates of Lux-Pain‘s story. Over ten billion of you entered, but there can only be one winner.

After ten days of deliberation (and by that I mean ten seconds of looking at your pictures in between wanking sessions) but I believe I have to go with AdamDuffield for his “Muthaf*ckin’ Worm” picture. I am drawn to the worm’s rather hopeless situation, but encouraged by his inescapable belief in himself.

The winner can use our Destructoid Forum’s PM function to send me a message with his postal address and we’ll get a copy of the game plus the case sent his way! Congratulations and thanks to all who took part.