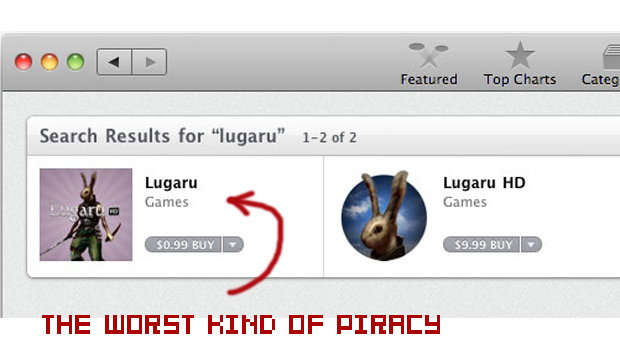 We’ve seen some despicable rip-offs appear on iTunes in the past months. Most recently, The Blocks Cometh fell pray to one of the worst straight rip-offs in gaming history — thankfully fixed by Apple eventually after an Internet outrage. But this, this is a new low. The worst kind of piracy imaginable.

“Developer” iCoder has taken the GPL-released source code from Wolfire’s Lugaru, originally meant for fans to create and have fun with, and packaged the whole thing to put on the iTunes App Store as their own game. That’s even one step beyond ripping a Flash game to republish yourself, because it’s not only simple theft but also a kick in the nuts to Wolfire, who believe that releasing one’s source code is something to be encouraged (and do remember they organized the awesome Humble Indie Bundle for all of us).

After being contacted by another gaming blog, iCoder developer Alex Matlin played off the issue because according to him, the GPL license allows iCoder to just repackage the whole thing to sell it for their own profit. Which they can’t, as Wolfire clearly and unambiguously stated upon the release of the source code: “Please note that the game data is not under the GPL, and forbids commercial redistribution.”

Furthermore, if you actually take the effort to read the GPL documents before you rip it off, you can’t miss this part:

All game assets and demo data (should all be in “Data” folder in the root of the source tree) are not under the same license as the engine code. Wolfire has allowed the data to be freely redistributed for non commercial purposes, but it is forbidden to use in any revenue generating works.

Look, selling a pirated copy of an original game on a city street corner or in a developing nation is one thing. Selling what is basically a pirated copy on Apple’s official App Store — which is supposedly intended to open up the Mac to things like Lugaru — and getting it approved by Apple is another thing altogether. Not only that, but iCoder actually raised the price from $0.99 to $1.99 today.

iCoder has no legal grounds to support their claim that it is OK for them to commercially release the same game under the same title with the same assets, so there is no gray area here. Thing is, Quake has similar GPL-released source code to play around with, but you can bet that no one would get a 100% rip-off Quake app approved on the App Store.

Where does that leave us concerned and disgusted folk to support Wolfire with this? This is 2011, after all, and what better year to rise up in outcry against authoritarian power structures using the Internet as a tool? First of all, there is glorious Reddit, which has worked really well in bringing The Blocks Cometh‘s iTunes rip-off debacle to mass awareness.

Second, iCoder has a contact page for you to voice your concern. You can also take a minute to laugh at their other ripoff apps, like an app that gives you free Hubble telescope pictures… for money!

I’d say spread the word if you haven’t already done so today! And while you’re at it, check out Wolfire’s new game, Overgrowth — the spiritual successor to Lugaru.