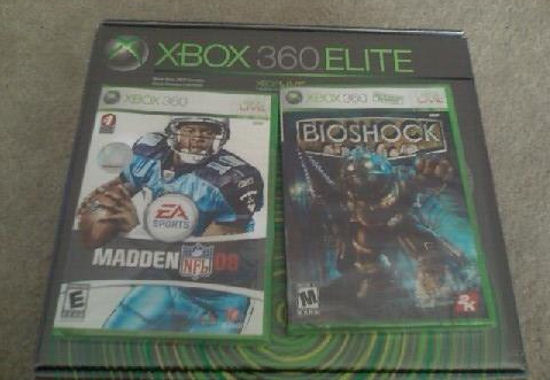 A little bit of fun from the NeoGaf forums. A user posted a picture of his newly purchased Xbox 360 elite with a copy of Madden 08 and … is that … BioShock? Yes, apparently he wandered into a Toys R’ Us and there it was, a standard copy of BioShock available to buy a week before the official street date. As is the way with anything on the Internet, the integrity of the poster was called into question because nobody, ever, is allowed to know or have something that others don’t. The critics were silenced, however, when the hapsome gamer opened up the case and took a picture of the sweet disc inside (picture below). Best of all was this comment from the world’s first BioShock owner:

I haven’t been hyped about the game much, but that 1upshow special made it look damned good. I was buying an Elite, TRU had that buy Madden, get other game for 50% off, so I decided I will gamble with 30 bucks.

As another on the message board pointed out, what brutal irony it is that the one person to own BioShock right now is one of the few not hyped for the thing. He got it half price, too. Yeah, I know what you’re thinking and I’m thinking the same thing — let’s find out where he lives and grab some pitchforks. This will not stand!