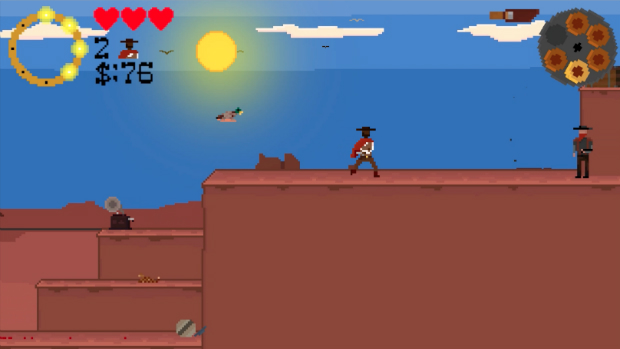 With an interesting luck mechanic

Luck is a concept rarely addressed directly in games. Sure, there are tons of games that use random number generators for everything from environment generation to damage calculation, and luck does factor into those. But the way Luckslinger takes it on feels unique: luck is a resource to be managed and it affects the world in obvious ways.

If the player has a lot of luck, life-saving platforms may appear at just the right moment. If the player is down on his luck, loose boulders may fall on his head. There is a Russian roulette minigame in there, for those willing to push their luck.

The other strange thing about Luckslinger is the genre mashup it uses. It’s a 2D shooter set in the wild west, but it features an instrumental hip-hop soundtrack. Hmmm.

Luckslinger is currently on Steam Greenlight and Kickstarter seeking a low funding goal of €7,000 (about $8,000).