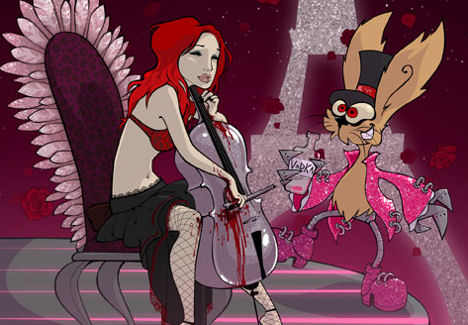 Luc Bernard, following on from his now legendary behavior following Destructoid’s review of Eternity’s Child, has today announced that he will be leaving the games industry to concentrate on graphic novels. Once everything concerning Eternity’s Child is wrapped up, he’s gone.

The outspoken game designer made no secret that his love of the business was pretty low. He had viciously and publicly criticized many publishers in the past, and seemed to hate dealing with anybody during the course of development. It would seem that our review was the straw that broke the camel’s back.

Luc claims that his other projects will now see the light of day as graphic novels, once he has overseen chapters two and three, as well the WiiWare version, of Eternity’s Child. Claiming that the negative press attention caused illness and alcoholism, Bernard is leaving before the stress does him in.

Bernard is a creative man with a lot of ideas and a very clear desire to be successful. I’ve certainly enjoyed speaking with him over the past year and hope he really does well for himself. However, if he wants to continue to work in the public eye, he has to realize that bad things will invariably get said, and that negative reviews are part and parcel of whatever creative business one enters. Simply giving up after one bad press experience is not the way to triumph.