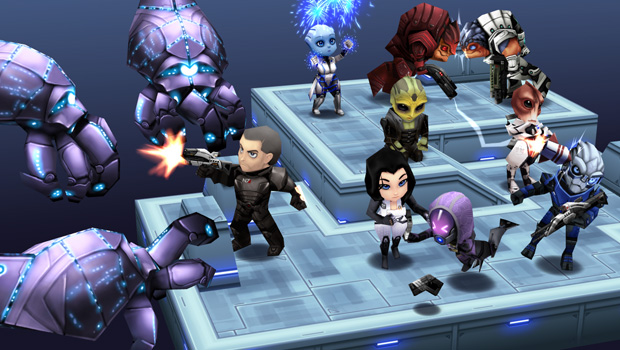 Do you guys remember how, in Final Fantasy VII, the character models during battles were tall, lean, and fairly well-proportioned, whereas the character models on the overworld map were short, plump, and super-deformed? It was almost like getting The Muppet Show one minute and then Muppet Babies the next.

I doubt Final Fantasy or Muppets were running through Polycount forum user Nix’s head when he had the idea to take characters from across the Mass Effect universe and render them with PS1-level geometry. Of course, the final product is way beyond what the PS1 could accomplish, thanks to Nix’s use of hi-res textures. He also rendered the scene with a set of lower-res textures, yet it still looks fantastic and out of the PS1’s league.

For a series that dives deep into uncanny valley territory, this super-deformed, low-poly re-imagining looks a billion times better (to me, at least). Sporting this look, I can almost imagine a Mass Effect action platformer or Power Stone-style party fighter. Everybody looks so adorable, from Shepard to Tali to an actually baby-faced Liara. There’s nothing about this that I don’t like!