Let me ask you a question: Have you ever liked something but was extremely disappointed that more wasn’t done with it? Have you ever played a game and said to yourself ” this is fun, but with a little more focus this game would have been amazing?” I have, and I wish to talk to you about it.

Now, other then being a gamer I am also a comic book enthusiast, if you will excuse how lame that last sentence was. I read mostly western stuff but I have been a fan of Japanese comics for a long time. One such comic was Trigun. If you haven’t read it, stop reading this thing now and go out and buy the Trigun Maximum series. It’s like the goddamn Jesus of action comics. It’s so goddamn hardcore any person who reads it will grow a beard regardless of sex (and no, the anime doesn’t count). This is why when I heard Yasuhiro Nightow, the man behind the series, had made a videogame I practically pissed myself. So I went out and found it as quickly as I could. So, was it the most amazing thing ever?

Well yes and no.

The game I am talking about is Gungrave for the PlayStation 2. Now don’t get me wrong, the game is fun and I would recommend it to anyone who is interested because what it does right it does really well. The game follows a character named Grave, a man that has been brought back from the dead who sets out to take out a crime syndicate. The very same crime syndicate that he used to be a part of, which is now lead by his old partner who betrayed him. And then there is something about some drug that turns people into superpowered monsters or something. I don’t know, the story is absolutely bananas but like Trigun the story is still incredibly fun and engaging despite how goddamn weird it gets at times. What makes it even better is the cutscenes which are incredible despite how short they are. If you liked the action scenes in Cowboy Bebop or Trigun you will love this. The art direction is great, sporting a cel-shaded style that makes the mediocre level design look a hell of a lot better.

The gameplay however is a mixed bag. Shooting up the environment is definitely fun, thanks to your duel pistols and the coffin on your back that is filled with ammunition and weapons like a Rocket Launcher and a Minigun. And when all else fails you can just beat people to death with it. How many other games allow you to shoot people with a coffin and then beat up the dead body with it? Special moves and finishing moves for the bosses also make things even better.

The problem however with the gameplay is that you move slow. Really slow. Those of you saying in your heads right now that this isn’t a big deal don’t get it. I cannot stress how slow Grave moves in this game. And this my friends absolutely destroys the flow of the game. Imagine clearing out a room of all the enemies and then spending the next five minutes walking from one side of the room to the other. That is five minutes of doing nothing my friends and it is terrible. A good portion of your time with the game will be spent plodding from one battle to another and for an action shooter such huge lulls in the action are not good. The other problem with the gameplay is the enemies. All in all, there are probably about 5 enemies in the game. A guy with a machine gun, a bigger guy with a machine gun, a guy with a sword, a bigger guy with a sword, and a guy with a rocket launcher. You can argue that there are more than this but they all behave in pretty much the same way as these five. What makes this even worse is that these guys will just run at you, stop, and stay there until they die or you do. they don’t run away, take cover, nothing. You do get enemies towards the end that actually fight with some semblance of intelligence but for the most part this is what you get. As a result the game is really easy. The only really sense of challenge you will get is the bosses (which are amazing by the way) and the final level.

And this is all made worse by really lame level design. Sure, they are never confusing to traverse and difficult to maneuver in but they are really boring and the pretty Cel-shading is all they will really offer you.

Overall, I couldn’t help but feel disappointed. Sure, it is by no stretch of the imagination a bad game and it was clear the game was really low budget, but still. With the level of craftsmanship other parts of the game received I find it inexcusable that certain aspects of the gameplay received so little attention. That being said, I felt that if they had more time and a bigger budget it could have been a lot better. Imagine how I felt when a sequel, Gungrave Overdose, was announced. So was Gungrave Overdose any better?

Let me put it simply: Gungrave Overdose is one of the worst games I have ever played. 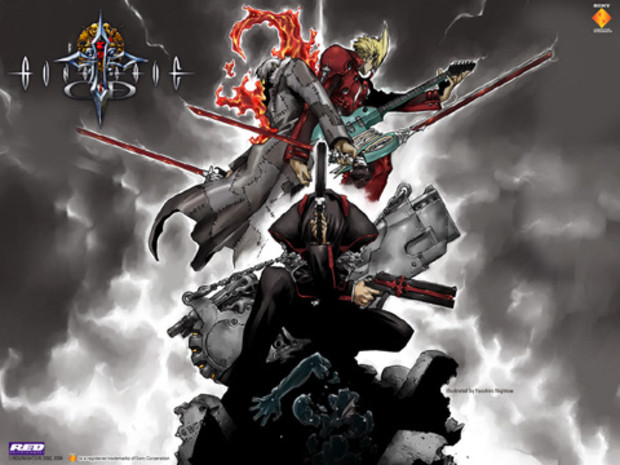 Imagine a sequel which instead of improving off of the original games mechanics breaks them in almost every single way. In the sequel you can choose between 3 different characters, Grave, Jujii, and Rocket Billy Red Cadillac. Now remember how I told you how slow Grave moves? Now imagine the exact opposite of that and you get how Jujii and Billy control. They move so fast and control so finicky that when playing through it with Jujii I got a terrible case of motion sickness. Just tilting the control stick in a direction will send you flying and doing a diving dodge move will send you careening across the level, crashing into enemies and walls and sometimes objects in the environment that you can get stuck on. Enemies are just as stupid except now they have learned the tactic of running around in circles. The level design is still bad but instead of just being boring now they are actually a pain in the ass to navigate. One level, a shipping yard, I spent a good 30 minutes trying to figure out how to progress when I found a dead end. It turns out I needed to jump up on top of the crates and move along the boundary of the level to get to the next area, essentially platforming in a game whose controls are nowhere near as precise to do such a thing. Jumping may sound like a no brainier to advance in a level but nowhere in the first game or the levels before it did you need to jump to progress. There was also no indicator that this is what you were supposed to do and to this day I still think I did something wrong and missed something that allowed you to progress.

But when you get down to it the reason why Overdose was so bad was how watered down it felt. The original was short, sweet and packed a punch. the game was about 6 hours in length but it was packed full of Nightow’s type of style and was able to deliver an interesting story in that short period of time. Overdose on the other hand was drawn out with meaningless missions and levels and unlike the original whose story was told through flashy cutscenes the majority of this games story is told through text conversations you have to click through. This effectively ruined the pacing even more because alot of the exposition is not needed and consists mostly of Jujii arguing with people. The last thing I want in an action game is 30+ minutes of text breaking up the action. Maybe if it was well written but it really isn’t. Overall, OD was a complete bastardization of what the original put forth and the only worthwhile thing that came out of it was Rocket Billy Red Cadillac.

Overall, the Gungrave series is an example of a missed opportunity. Gungrave was a good game that showed a lot of potential who was given a very poorly done sequel. A game most wouldn’t have ever heard of if an anime wasn’t made out of it. I really like Gungrave and I can easily say it is one of my favorite PS2 games. The problem is it could have been my favorite instead of just one of a select group. I can say with perfect certainty that if more thought was put into it’s design it could have been the best PS2 game ever. As is however it will probably fade away in obscurity in a couple years, an example of what could have been.