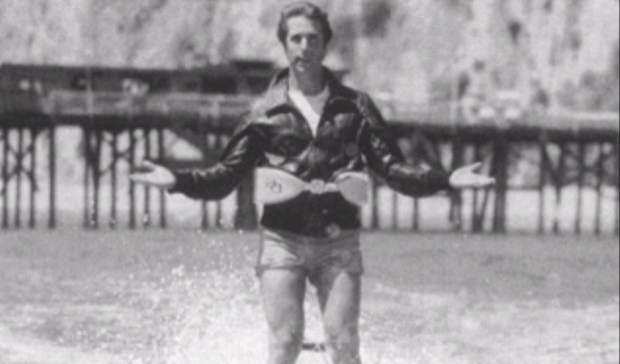 Videogame developers have big imaginations, but when it comes to storytelling there must be some kind of Manchurian Candidate-style switch in their head that forces them to put on some jet-skis and jump over a well-educated shark. It seems incomprehensible for a medium that is increasingly emulating its cinematic influences in an effort to gain mainstream acceptance, but in reality, it’s all down to a constant struggle between servicing the needs of the narrative and the involvement of the player through interaction.

Yet for no reason at all, even the most seemingly level headed games must push the extremes of plausibility when there is little need of it.

Take Fahrenheit a.k.a. Indigo Prophecy for example, the story involves an average office worker running from a ritual murder he committed while possessed. Eventually he dies and comes back as an un-dead guardian for some autistic, prophecy child. That’s all well and good, but all of a sudden some AI program in a glowing robot body pops up and wants a piece of the action. In the famous, albeit paraphrased, words of James Cameron on the set of Aliens:

What is it with a videogame writer’s need, nay necessity, to type up something that pushes a balanced story into the realm of alienation?

There’s usually a moment or an entire arc in these stories where, ultimately, they serve no purpose at all. Those ‘jump the shark’ (or ‘nuke the fridge’ if you’re the 13-20 age bracket) moments must seem entirely plausible and mind-blowing to developers. I mean, how else do they try and use the word ‘mature’ while keeping a straight face all the time? Though sometimes we can take something bad and embrace it to the point where even the developers will ironically get the joke and make a career out of it, a la David Hasselhoff making a living off The Hoff persona.

For me, something like Resident Evil’s plot is like the equivalent of watching a Jean-Claude Van Damme movie after watching a movie by Wong Kar-Wai; it’s alright to turn off the brain cells once in a while. There’s no shame in it at all, since nobody can be that ‘on’ with every game they encounter. Sometimes however, it seems that writers are just being too clever for their own good and this is where things truly fall apart.

Honestly, I didn’t particularly care for Okami on release since it was a game that concerned itself with style over substance; the re-skinning of enemies, the pattern memorising of bosses, their needless reappearances (you have to fight variations of same spider boss about five or six times) and the general reliance of acquiring skills to use on backtracking puzzles. I wouldn’t have minded the obvious Zelda and Metroid nods/homages/rip-offs if it wasn’t for the story though.

So if I paid attention from the last time I played it (on release and now collecting dust), you play a demi-god that gets re-awakened in a time when the world is about to be plunged into darkness, which is seemingly caused by an old enemy and along with an inch-high sidekick, you travel around Japan to stop the spreading darkness. It’s all based on a mythical story and it’s completely fair to take liberties with interpretation. Well, until the writers decided to pull a bizarre un-foreshadowed twist that contradicts much of the tale.

Actually, the idea of people worshipping other beings as gods and demons isn’t such a crazy idea in itself (see also: Stargate, many Doctor Who serials and the videogame Forbidden Siren), but it’s the execution of Okami’s twist that was the real problem for me. It all comes out of the leftfield blue and that, my dear reader, is not good writing.

It’s like when this guy in my film class wrote a short script about a journalist who goes to meet an aging sportsman. They talk about this guy’s achievements and his life in general. All of a sudden, the sportsman turns into a bloody werewolf and eats the journalist. Then there’s a hard cut to black and some credits. Did you see the twist coming? Only if you read ahead! Okami is exactly like that awful script in its final hours. After all the mythical deity talk, you’re given this factual occurrence and you soon question the first few hours of play. If there’s the science of extraterrestrial life, why is your sidekick an inch-high human sprite? How does an alien control the sun itself now that we know it’s not an almighty being?

Why should I care about this if it’s just a game?

Well, the idea of having to settle for shark jumping isn’t exactly ideal either.

We’re basically an audience who just accepts the limitations just as much as price hikes because we have bad teachers or even decent ones struggling with awkward answer books. Games developers can emulate everything they see from cinema, but are really unable to grasp the themes behind the imagery. Videogames aren’t, naturally, hastily put together without communication; but the writers don’t exactly go about researching themes and ideas in the same way film writers do. They’re mostly there to come up with some dialogue and cutscenes, you have other departments to come up with the expensive set-pieces and stunt-work.

Currently we have game writers who are naive idealists who reluctantly co-exist with their developers, designers who misinterpret themes they ‘pay homage/steal’ and the people that understand the assimilation of interaction with narrative. The poster child at the moment for game writing is Rhianna Pratchett, but it’s hard to take her seriously. I mean, how am I supposed to agree with her critical comments when she’s written something as awkwardly mid-90’s as Mirror’s Edge.

Tattooed outsiders with daft cyber-hippie names fighting against The Man or an out-of-touch, glorified courier service who know every line to Point Break, Hackers and The Matrix on repeat? You decide.

I’m not sure why magazines don’t request interviews with better writers like Sam Lake (Max Payne and Alan Wake). He’s an amazing writer who comes across as the opposite of Rhianna Pratchett. His work is very post-modern because he understands the assimilation of narrative and interaction, unlike Pratchett, who seems to fight against it. The same goes for the Hideo Kojima, who understands the design and works it into his narration; even if most of the time his messages become smothered with over indulgence.

There are plenty of writers who deserve more focus and the more they speak about the process, then the more likely games will be taken more seriously. Just off the top of my head, there’s a few examples that show the potential of videogame writers – Left 4 Dead 2’s subtle take on post-Hurricane Katrina and the ineptitude of FEMA, Silent Hill 2’s noir-like examination of relationship breakdowns, Steambot Chronicles cautionary tale of industrial advancement and Max Payne 2’s painful introspection of moving on are all great examples of storytelling. They mostly create their tales through mise-en-scène and not straight forward sign-posting, e.g. Payne’s world is full of references to Norse mythology though he never stops to remind you in his narration.

When writers know how games work they help contribute towards an idea that you wish was a film, but even better as a game. Just look at the Uncharted franchise, which was considerably more fun than the last Indiana Jones movie it takes its cues from. Videogame writers help shape imaginary worlds for you to inhabit, create fictional characters you can connect with and build up the set-pieces that you remember for years to come. Best of all, these games are creating theatrical ideas that speak to you in the way cinema sometimes fails too (and hey, let’s not be biased, it can be vice versa too). Do you think Halo would have been made as a film first and have been just as successful? It’s somewhat unlikely, judging by Hollywood’s cold feet of a big screen outing and Half Life 2 made the alien invasion genre more engaging than it ever had right to be, post-‘Martians equal Communists’.

We get the stories we dream of from subtle, amalgamated influences and when it works, it’s something we personally enjoy as much as if we were sitting in a darkened cinema. So here’s to loving and hating all those videogame writers who have the unsung job of having to create a suspension of disbelief for every shark baiting moment and fleshing out the iconic characters that other media outlets would like to think of as ‘two dimensional’. We wouldn’t have so many fond memories without you.