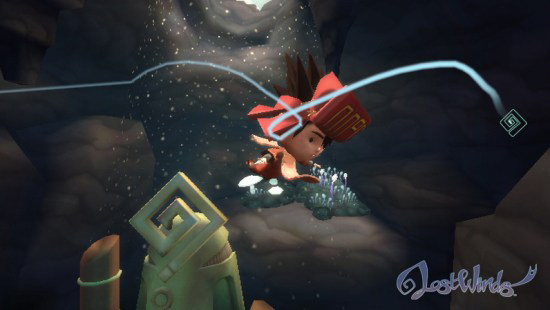 Lost Winds has a look to it that reminds me a bit of the films of Hayao Miyazaki. At first I couldn’t figure out why, since the resemblance is not direct, but then it hit me like a bag of bricks to the face: it has the same feeling of whimsy and adventure, the kind that makes you realize what a beautiful vision children have of the world. Of course, I could be dead wrong and the game could suck horribly, but I sure hope not.

Here’s a bit of plot from Frontier Games‘ official website:

You wield the awesome powers of Enril the wind spirit – from raging tornados to the gentlest breeze – to guide and protect Toku, a young boy who is the only one who can help you release the curse placed upon the world of Mistralis by evil Balasar. Mistralis is a stunningly presented, magical land full of wonder and intrigue that bursts to life with your every action and exploration.

I hate to say this, but sometimes I think I have more faith in the Wiiware service than I have in the actual Wii itself. Lost Winds makes the third game that I’m really looking forward to seeing on the service (the others being Final Fantasy:Crystal Chronicles and Eternity’s Child.) This is more my speed — fantasy worlds, distinctive design and not a casual multiplayer function in sight. Woo!

No pricing or release date has been announced yet, but it’s safe to say we will find out more soon as Nintendo seems hot to get Wiiware off the ground. I’m starting to get a little hyped about it myself.