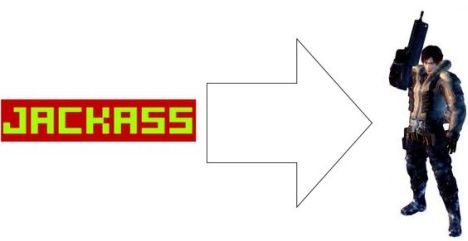 Lost Planet is out today, first of all. Second of all, I’m only a few hours into it (for Destructoid’s impression, look for a comprehensive multi-author review in a couple of weeks), and I already detest the human race.

1. Humans get bored of Earth and leave.

2. Humans land on a planet made almost entirely of ice, where the temperatures are so low that any reasonable species would never set foot there in the first place.

3. The aliens who originally lived on the planet attempt to defend it from this unprovoked invasion force.

4. The humans bring in machine guns, rocket launchers, and mechs to exterminate every last one of the planet’s original inhabitants.

There’s a bit more after the jump, to keep the home page looking trim.

Way to go, mankind! Not only is the game stylistically identical to the movie Starship Troopers, it’s thematically indistinguishable as well!

When I say that the humans got “bored” of Earth, I’m not exaggerating: the prologue states nothing about Earth dying, or getting too crowded, or anything like that. In the future, mankind just up and decides to move to an uninhabitable planet and kill every life form on it. Just for fun.

Additionally, there’s the space pirates; evidently, they were left behind once the humans fled the new planet (to rearm), and they’ve decided to exact their revenge by killing pretty much anything they see (assuming they can hit it, anyway). The presence of the space pirates shows mankind’s inhumanity not only to the bugs, but to mankind, as well — what kind of race leaves a fraction of their brothers on a freezing alien planet while everybody else goes to find more guns? Having to kill these space pirates as the main character should make you feel very, very dirty.

So feel free to play and enjoy it, but know this: in doing so, you are supporting a human race whose overall goals are nigh-indistinguishable from those of the Nazis so many years ago. Assuming you replace Jews with bugs, anyway.