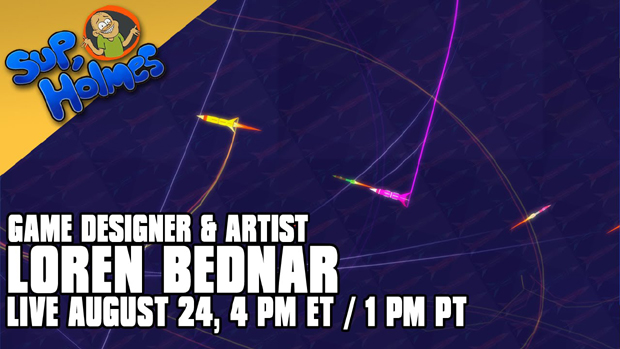 Two weeks ago on Sup Holmes, we welcomed Loren Bednar (RocketsRocketsRockets) to the program. This was right before Loren’s latest game won a best of show of PAX award from Dtoid, so don’t go around thinking I was trying to exploit his new found glory. Loren may not be that well known of a developer now, but the same was true of Rami Ismail, Zoe Quinn, Phil Tibitowski, Christine Love, Sean Velasco, and Sophie Houlden when they were first on the show. Ah, they grow up so fast.

Loren is he is one of the most constructive, supportive people in the game industry that I’ve ever met. That’s the main reason I wanted to talk to him. He makes sprite sheets for aspiring developers to use for free, just because he likes to help. He makes beautiful fan art based on his favorite games, just to show gratitude and encouragement. He looks at the world of gaming and asks “What can I offer you?” as opposed to the “What can you offer me?” attitude that we see far too much of these days. For that reason alone, he’s a role model. His games are pretty darn fun too.

Thanks again to Loren for appearing on the show. Tune in here at 4pm EST if you want to get to know Matt Gilgenbach, creator of Neverending Nightmares, the Edward Gorey-influenced horror based on autobiographical experiences with mental health symptoms. I’m sure we’re going to have a lot to talk about.