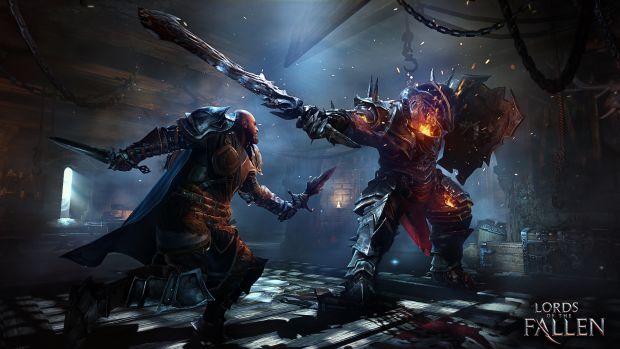 A couple of weeks ago I wrote up this little story asking for CI Games to show us some real gameplay footage of Lords of the Fallen. Well, there’s still no footage but at the very least I got to see the game in action earlier this week in person and boy was I impressed.

Visually the game looks like it’s truly taking advantage of the new gaming hardware. In fact the screenshots don’t do the game justice. From the character designs, to the levels that you’ll be traversing in a similar style to the Zelda series, it all has a ton of detail that brings this medieval fantasy to life.

What I’m really looking forward to is the combat. The action-RPG is more strategy rather than a hack-and-slash, and you really have to experiment with each fight to see what works. Going in blindly swinging will just get your ass kicked, especially against the bosses that can take you out in one hit sometimes. That should tell you something especially considering that most fights will typically be one-on-one battles.

“We wanted to try to make it feel as if Tekken or Street Fighter was imbued inside every one-on-one [fight],” executive producer Tomasz Gop told us. That said it’s not trying to be a completely hardcore game as there will be a lot of tools to help you experiment and not get totally frustrated. “I think it’s a tactical kind of game,” Tomasz commented. “Very advanced in terms of combat, but at the same time we’re trying to make sure that it’s not a treadmill kind of experience.”

Most of what I saw was pretty much covered by Destructoid in the past if you want to learn a little more about the combat system and character customization. I do want to give you a deeper dive, but not until we get some actual hands-on time. Otherwise, Lords of the Fallen will be out this Fall for the Xbox One, PlayStation 4, and PC.