There’s method to the madness

Action role-playing games are usually hit-or-miss in the way that they’re received. The slightest deviancy in mechanics can turn a thrilling affair into a mundane and unexciting one. For the past few years, From Software’s Demon’s Souls and Dark Souls have perfected this formula and championed the genre.

After seeing a hands-off demo at E3, I wouldn’t be surprised if Deck13’s Lords of the Fallen gives From Software a run for its money. If this happens, it’s because Lords of the Fallen looks like it’ll strike that exact same chord with players — tough as nails, but doable once you slow down and figure out your approach.

The demo displayed the combat’s overarching strategy component to a tee. Lords will rarely throw more than a handful of enemies at you at once, but that doesn’t mean that they’re pushovers. Each enemy requires methodical dissection to best; rushing in with a hack-and-slash technique will lead to nothing more than certain failure. 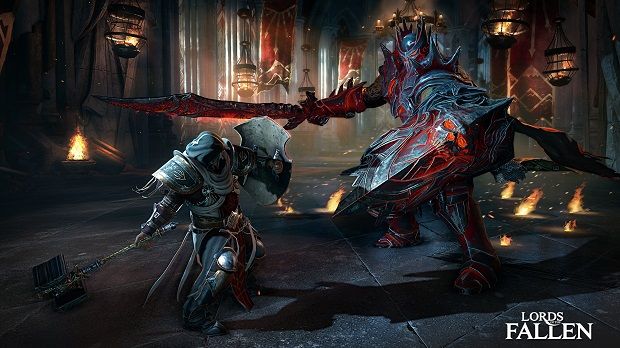 One boss was shown, and he exemplified the necessary play style. The developer that was leading the demo let it strike a few times to simulate the player “learning” where the gaps in its attacks were. Once these were understood, he jumped in at every apt opportunity, slowly chipping away at its health until it was bested. As long as he remained patient and didn’t get greedy, the boss was definitely beatable.

Lords of the Fallen takes place in a medieval fantasy setting where the gods have failed mankind. Some sort of “unstoppable supernatural force” has taken over, and Harkyn, our protagonist, is called upon to save the land. The developers didn’t go into too much detail regarding the plot, opting instead to focus on the game’s core mechanics.

As Lords begins, the player must choose to play as a Warrior, Rogue, or Cleric. However, this decision only affects the weapon and armor sets that the player starts with. Later in the game, players can effectively switch classes by using different equipment. Further, skill points can be put into any combination of three trees. This all keeps the class role very dynamic and never locks the player into one specific direction.

Lords of the Fallen is aiming for PC, PS4, and Xbox One, and won’t release until sometime in 2014. There’s still a ton to learn about this title, but what’s been shown looks really promising. Right now, it’s shaping up to be one of the games on a short list that action-RPG fans adore.