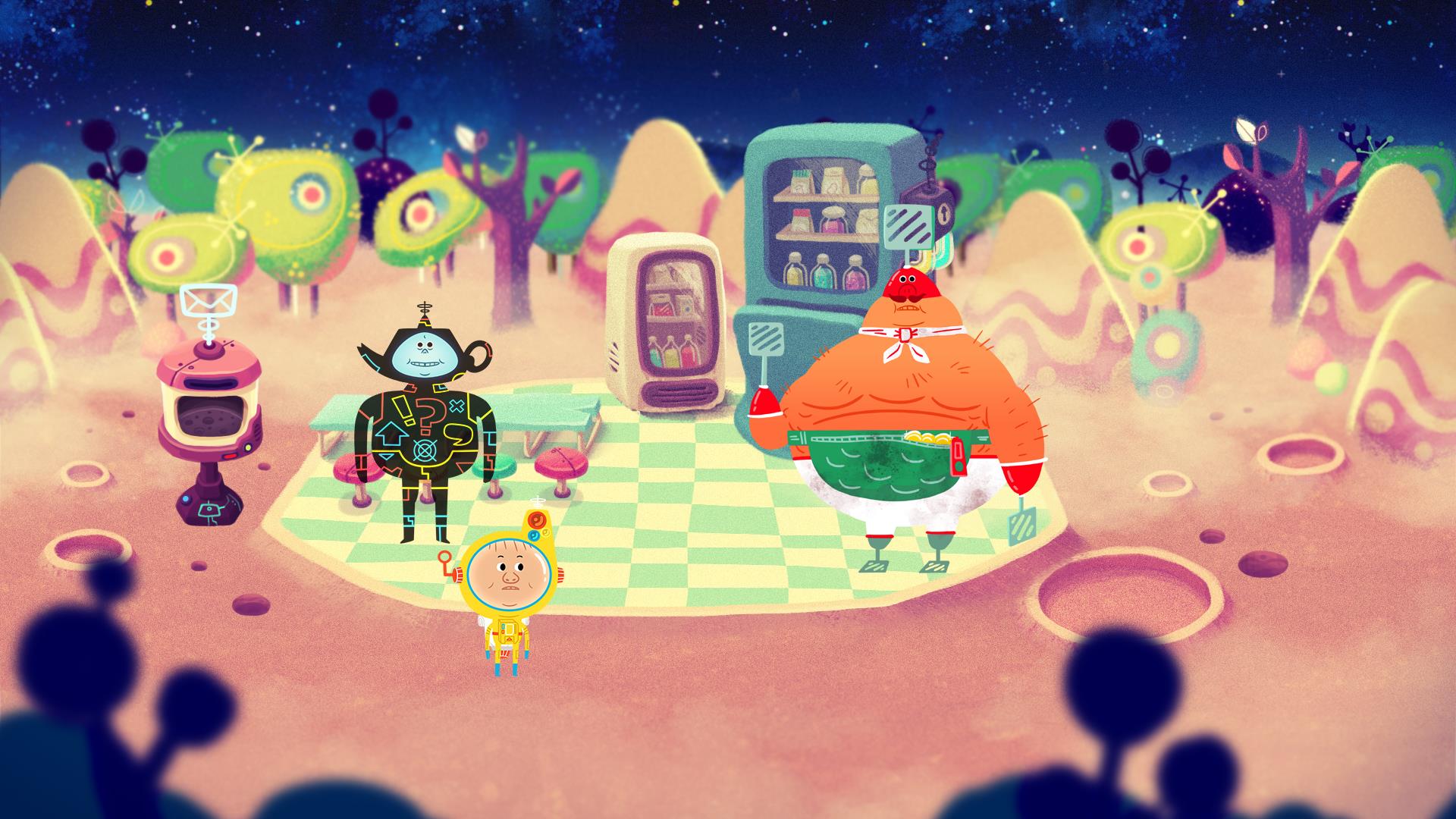 Teapot bot is the best!

What if I told you there is this game called Loot Rascals made by some of the people who made Hohokum, and featured art by the artists behind Adventure Time and Alphabear? Well I’m telling you now, because Rascals is an extremely colorful roguelike that’s easy to dig into.

Long story short, you’re a space traveler, and your spaceship crashes after a moon shows up out of nowhere moments after your teapot-headed robot buddy malfunctions due to what I can only assume is some kind of demon. On the surface of this moon you run into many zany creatures that mostly intend to kill you. Why? That isn’t quite clear yet, nor is what the end game is if there is one.

Story wise you’re obviously trying to repair your ship and get off the planet, and although the gameplay feels real-time due to being able to constantly move in smooth motions, it’s actually turn based. The playing field is laid out in hexagons, and each time you move to another it counts as a turn, in other words, enemies move as you move. If you end up on a hexagon with an enemy you’ll auto-attack it, though you can decide to cut and run if you’re low on health.

Many enemies will drop cards that serve as your loot. You can equip eight of these cards at a time, in two different rows of four. The layout of these cards is important due to certain loot giving you bonus stats if say they are in an even numbered space, or if they are beside a card that gives +1. Loot can range from more health, armor, attack power, and some gadgets that can do various effects. Cards that you aren’t using or are valued at less that your other equipment can be turned into tokens which can be used at the base you start at to buy items or restore your health. Thankfully as long as too many monsters aren’t very close to you, you can warp back to the ship.

Currently, the game feels simple, but in a good way. It has many of the staples of the roguelike genre, only implemented in a way that makes them fun. For example, many roguelikes have a ton of boring inventory time, here you have to figure out how exactly to arrange your inventory which almost feels like a puzzle or math problem that is rewarding once you figure it out. While the levels are randomly generated thus far, it has yet to make it feel like I’m under powered or getting killed due to RNG.

The best thing about Loot Rascals though is just how darned easy on the eyes it is. The characters and the world they inhabit are extremely colorful, the enemies are varied and hilarious such as a buff horse that walks on two legs with a seahorse wrapped around it, or buff sexy green cyclops. The animated introduction is probably colorful enough that it will draw in many players sick of the browns and grays that the current generation of consoles are offering aside from a few standouts.

I’m not a huge roguelike fan, but so far it seems like Loot Rascals is doing enough right to make me want to play the full game whenever it releases (on PS4 and PC), if anything just to see what zany creatures I run into and to hear more dialogue of the lovable teapot bot.