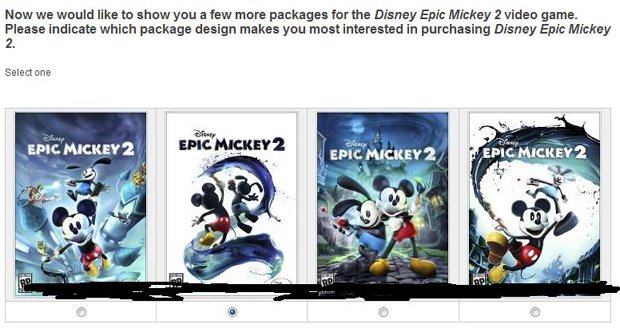 According to an anonymous Dtoid reader, Epic Mickey 2 is currently being gauged by Disney via online marketing. There are a lot of specifics here, which is always nice. That doesn’t mean that the game is definitely going to happen, but it sure looks like the development of Epic Mickey 2 has gone well beyond the “purely theoretical” stages. There are several potential box arts here, as well as some of the titles being considered for the game (including Epic Mickey 2: Return of the Mad Doctor, Epic Mickey 2: The Power of Two, Epic Mickey 2: Mystery on Mean Street, and just Epic Mickey 2).

The game is reportedly planned for release on the Wii, the PS3, and the 360. Gameplay details include the option to play 2-player split screen with Mickey Mouse (back with his paint and thinner mechanics from the first game) or his older brother Oswald The Lucky Rabbit (who can “fly like a helicopter” and use electricity to “fight or friend” foes).

It might have sold pretty well, but Epic Mickey was still a better game in theory than it was in practice. I have high hopes that Disney and Junction Point will be able to do better the second time around. Also, that split-screen mechanic sounds like it would be perfect for the Wii U and the PS3 + PS Vita set ups. Lets hope that functionality makes its way into the final game, if and when it’s ever officially announced.