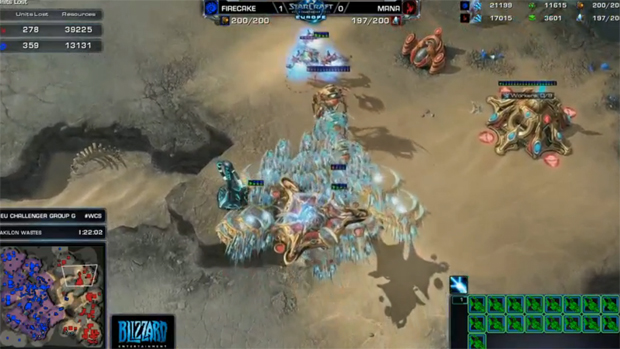 Becomes a study on commentator’s patience

The match begins at 125 minutes in

Once, I watched a StarCraft II match on Metalopalis between two Terran opponents, and it lasted for about an hour and a half. It felt like an eternity. After a while, it wasn’t even suspenseful anymore. It was more…infuriating. Then the big battle happens between the two maxed-out armies and it becomes a true test of who can micromanage their hundreds of units better than the other.

On Tuesday, players MaNa (Protoss) and FireCake (Zerg) squared off in a no-holds-barred SLUGFEST SNOOZEFEST of a match. Sure, it’s just over three hours of match, but it’s about 10 minutes of fighting throughout. Both of these players are essentially playing a single-player game for about two and a half hours, and then they decide to actually do some damage. There’s some base-attacking action, largely with Infested Terran, but it really is just a game of chicken until someone clucks up.

Watching the match soon becomes something far bigger than StarCraft II: a psychology study on the two commentators, Madals and PengWin. They’re rarely speechless, narrating as they check reddit and Twitter, while reading tweets aloud to the audience. The audience that grows to about 30,000 by the end of the match. That’s 10,000 for every hour! In fact, the most suspenseful moment of the match is when PengWin is about to read the rap he created while the match was going on, only to be stymied by the ACTUAL END OF THE MATCH. Classic timing.