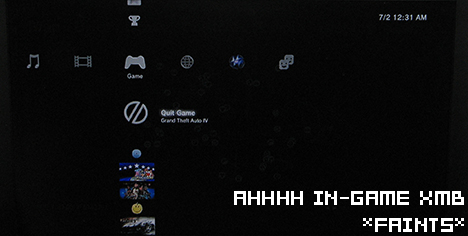 It’s finally here, fellow PS3 owners. The granddaddy of all firmware updates doesn’t seem to have an appropriately significant revision number attached to it (you’d think they would’ve at least called this one v2.50), but regardless, its feature set will surely bring all the boys (and girls) to the yard.

In case you’re a bit behind the curve and aren’t aware of what the v2.40 update will allow you to do, check out parts one and two of Sony’s official video walkthrough for the update, as well as the update’s FAQ, all of which were posted on the PlayStation.Blog yesterday. The update went live at midnight EDT.

I just downloaded and install the update myself. For such a huge (at least in terms of features) update, it took a very short time to download — about two and a half minutes for me (and I’m on wireless). The seminal system software update took around three minutes to install. As for Sony’s official list of what the update brings — as was displayed before installation of the update — I’ve transcribed it verbatim, and you can see it after the jump.

Well, what are you waiting for? Go download and install v2.40, then sit back, relax, pop in GTA IV, and message your friends while you’re getting serviced by hookers. Speaking of which, the image above is a photo I took while accessing the XMB during GTA IV. And for everybody who was complaining, GTA IV automatically pauses when you hit the PS button.

The [Friends] category has been redesigned. Also, the number of people who can be added as Friends has been increased to 100.

A trophy feature has been added. You can now collect trophies for games that support this feature. To see your trophies, go to [Game] > [Trophy Collection]. To see a Friend’s trophies, go to the Friend’s [Profile].

During gameplay, you can exchange messages with Friends or view trophies. You can perform these functions from the XMB™ (XrossMediaBar) screen that is displayed when you press the PS button.

You can now perform an Internet keyword search directly from the XMB™ screen. To use this feature, go to [Network] > [Internet Search].