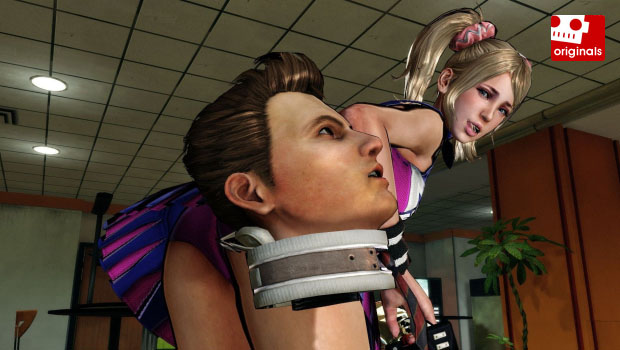 Love it or hate it, Lollipop Chainsaw has opened the floor for some interesting discussions, especially with regards to its portrayal of women. Is it objectifying female game characters? Is it subverting that objectification? There’s plenty to analyze and debate, if you’ve got the inclination.

I offered what I felt, in my not-humble opinion, to be a fairly unique analysis when I suggested that the living head of Juliet’s boyfriend, Nick, was an exercise in role reversal, as the male character is objectified and helplessly forced to tag along with a far more capable heroine — a heroine that, in several ways, treats him like little more than an accessory.

The analysis caught the attention of the game’s writer, James Gunn, who seemed to agree with the assessment. So it was that we chatted further on the game’s themes, and on sexism within videogames in general. 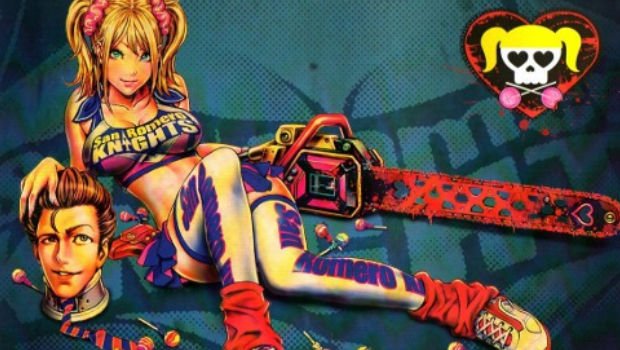 “Essentially, it’s true,” said Gunn, discussing Nick’s objectification. “Nick is objectified by Juliet — he’s literally turned into an accessory, a commodity, and his humanity is denied. Nick is not only emasculated, he is SUPER emasculated. He starts off as this cool high school jock, and he thinks his girlfriend is this demure cheerleader, and then discovers she is a thousand times tougher — that is, more traditionally ‘masculine’ — than he’ll ever be. And, on top of that, he loses his body and penis (which is just sort of the straw that broke the camel’s back).”

“But within this emasculation, Nick has to find some worth other than being the strong one. He needs to find strength through trust. And Juliet needs to learn how to let go of control. So, yes, that is definitely gender role reversal. That said, while writing it, I didn’t think of this in terms of gender, I thought of it in terms of character and plot. I think males and females — and especially teenage males and females — tend to commodify each other and that’s a dangerous thing to any relationship.”

The idea for Nick as a magically resurrected head came from — who else — director Suda 51. Gunn can’t take credit for the initial idea, but would share how he came up with Nick’s personality and overall influence on the narrative.

“He was always a head — or at least from the first time I interacted with Suda, he was,” Gunn explained. “I helped to change things about the general look of the characters, but the fact that he was a head hanging from Juliet’s waist seemed to be a part of Suda’s original vision. The story stuff, the relationship and commodification through-lines, their personalities and dialogue, that was my addition.”

“When I came on board, there was no conflict at all in Nick and Juliet’s relationship. The visuals were coming into place, but it was pretty much all ‘I love you, baby!’ ‘I love you too!’ I wanted to add some conflict between the two of them, something that both of them needed to learn, and something that approached a three-act structure. It seemed natural to me that Nick would be upset about being a head, and would feel emasculated. And Juliet is still in the early stages of the relationship, where she sees Nick more as an ideal and less as an actual person.” 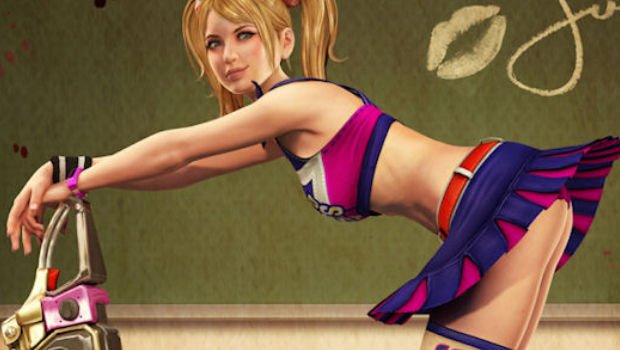 Regardless of what Lollipop Chainsaw says about relationships and no matter how much it objectifies Nick, there’s no escaping the fact that Grasshopper’s game features a cheerleader in a very skimpy skirt who isn’t shy about providing gratuitous panty shots. The game has been accused of objectifying the lead character, and it’s certainly difficult to deny it. James Gunn, for his part, doesn’t try to, but he refuses to classify the game as “sexist” in any way.

“Well, listen, like it or not we are, actually, all objects,” he responded. “Our physical forms — and the idealized forms of those physical forms we find in pop culture — are something most of us find appealing, whether it’s Juliet’s butt or Batman’s ripped abs. Lollipop Chainsaw is titillating, for sure. A lot of that is just because Lollipop Chainsaw took an everything-and-the-kitchen-sink approach — it’s utterly shameless in that regard. And there’s a lot of grindhouse and Russ Myer in LC — a fun, floppy, over-the-top sexuality that plays with those old forms but is self–aware of them the entire time.”

“But I think it’s important people don’t confuse sexuality with sexism. There is nothing in the game, ever, that makes females somehow less than males. To be honest, I think a lot of the criticisms of LC‘s ‘sexism’ are really coming from a place where the secret message is sex is bad, sexual attraction is bad, lust is bad. I was raised Catholic: I get it. Yes, Juliet Starling is hot as hell. And, yes, that probably helps to sell copies of the game. But my question is, so what? How in the world does that convey that women are less than men?”

“If you’re saying that Juliet Starling is, like Barbie, an impossible ideal that makes women feel bad about their own bodies in comparison well, okay. You have a point there,” he continued. “But welcome to NEARLY EVERY SINGLE THING IN POP CULTURE EVER. I am an avid reader of Marvel comics and, believe me, Wolverine’s ass makes me feel shitty about my own ass in comparison. Wolverine has got a tight, hot ass. If I watch the Bachelorette and those dudes take their tops off and every one of them has amazing pecs — yeah, that makes me feel like crap as well.”

“I work out every fucking day. I don’t know how these people do it. So, yeah, I look forward to the day I can make a videogame with a chick with flat, droopy boobs and fat butt who’s still sexy, or a superhero with a pot belly who still knows how to come off looking cool. I would love to be a part of that movement. However, I’m not sure I can get away with it today.”

While Gunn will defend Juliet’s sexuality and agrees with the points concerning Nick’s role in the story, he interestingly countered those pundits who argued for the protagonist as a bastion of female empowerment. He stated that he disagreed with Juliet Starling being a symbol of such a thing.

“I mean, I guess she is, in some ways, but truthfully, although Juliet is remarkably good at fighting supernatural beasts, she’s a fully developed character all to herself. She’s smart about some things, dumb about others. She can be remarkably kind and remarkably self-involved. She’s a cartoon, but she’s also a person. Like many of the characters I’ve had a hand in creating, I have a real love for her. But she’s not better or worse than anyone else, in terms of who she is as a person. I believe when characters become symbols of female empowerment it is, in many ways, a reaction to sexism that is sexist in itself — you’re still taking away a woman’s humanity and replacing her with a symbol.”

Lollipop Chainsaw has been but one element in an ongoing and increasing discussion of women and their treatment in the game industry. I asked Gunn — as somebody who’s worked with both games and movies — whether or not the videogame industry had a particularly unique problem with women, something that it needed to address moreso than other media.

“First of all, let me say, I think the gamer community has a big problem with women, and that is that so few women are in the industry! Going around to gaming conventions, I was shocked by the small percentage of women who work in gaming — there are barely any on the creative side, nor on the business side, nor on the journalistic side. I think more than worrying about how fictional women are treated in fictional worlds, we should care about how real women are treated in our real world — and that means hiring more of them within the gaming world, on all sides of the business. That, of course, would affect how women are treated in games as well.”

“Other than that, I really think we need to create women as more full characters,” he stressed. “I think games are even worse than movies in this respect, and movies are pretty fucking awful. If you want to see sexism in entertainment in action, look at 95% of mainstream film comedies. There are a bunch of funny, multi-dimensional guys with interesting characteristics, and then you have one female character who is ‘the girl’ whose only real trait is that she’s pretty. By creating full characters you automatically combat sexism.” 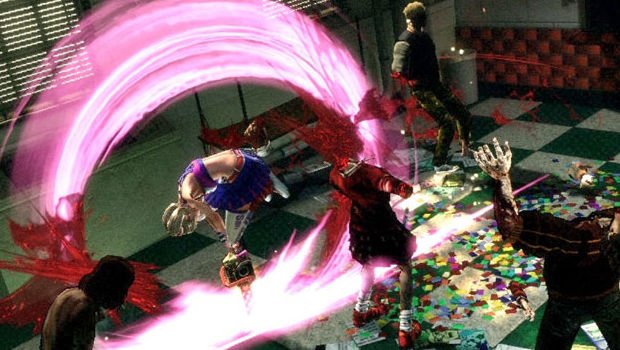 Women as actual characters? How novel! But seriously, it’s a noble endeavor, and something we need more of in all media. It would also be great to see more of a female character being built for her own sake, not serving merely as a patronizing, counter-culture symbol. Then again, perhaps some of these symbols are required right now, to beat audiences in the head until they’re ready to accept female protagonists who offer more than gratuitous sexuality or moral messages that women are empowered. It’s obviously sad that this should have to be a conversation in the first place, but I’m glad that the game community is, at least, talking about it.

I’m glad, also, that Gunn spoke with us about Lollipop Chainsaw and his approach to creating a sexy — not necessarily sexist — character. Agree or disagree, I think it’s at least a step forward that we’re analyzing this stuff rather than brushing it under the carpet, and as such, thank Gunn for speaking with us.