Great news: playing Grasshopper Manufacture’s Lollipop Chainsaw is just as insane as watching it in action. Suda51’s latest tale of a zombie slaughtering cheerleader is as quirky and demented as fans have come to expect.

While we only had a chance to see the game in action at gamescom, publisher Warner Bros. brought along a more refined build of the game to PAX this year. As the show floor opened yesterday, I made a beeline towards Lollipop Chainsaw‘s booth — a makeshift high school hallway splattered with blood and zombie limbs — to get my first hands-on with the upcoming title. 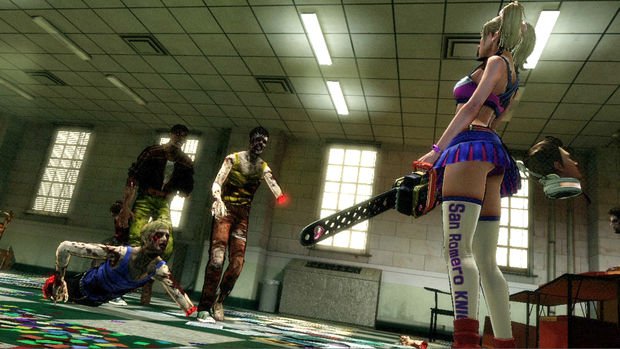 Just last week, I fired up No More Heroes: Hero’s Paradise for the PlayStation 3, so that game’s third-person action is fresh in my mind. While Lollipop Chainsaw‘s combat can’t be directly linked to that earlier Suda51 title, some similarities seem immediately obvious. Both titles for instance, feature combat that’s designed in an attempt to minimize mindless button mashing.

Lead Juliette won’t let her years of cheerleading practice go to waste, with one of her attacks being the use of pom-poms. This light attack will do minor damage to undead, but that’s not really their main function. Instead, this short ranged attack is used to shuffle zombies about an area, the idea being to herd them into massive clusters. Once they’ve been grouped, that’s when the chainsaw comes in handy. 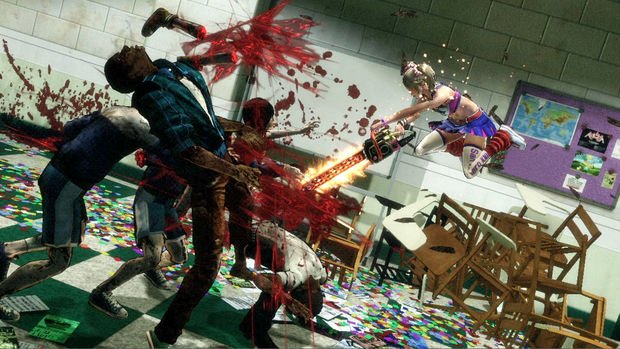 Broken down into two attacks — a sweeping high slash and a low jab — the chainsaw will, as you’d expect, remove limbs from the undead. Take off an arm or two, and ghouls will still stumble in your direction trying to get a taste of your young (but over 18!) flesh. Remove the legs, and they’ll fall to the floor, crawling in your direction, intent on their human meal. It’s their heads you need to worry about: one nice, high swoop will decapitate a zombie, sending their craniums flying, splattering their blood on the screen, and… releasing a flood of rainbows and stars.

The idea here is to not simply kill all of the zombies as quickly as possible — it’s to kill them in stylish ways, earning “zombie medals” for your efforts. Decapitating one zombie might be satisfying, but leaving gory neck stumps on three or more zombies at once will result in greater “zombie medal” rewards. Juliette also has a leap attack that can be used to not only get players to safety or help position the undead, but for more stylish kills. With the right timing, I was able to leapfrog over a zombie and quickly gut the ghoul with my chainsaw. In these instances, a quicktime event was triggered, like pressing in the direction of the chainsaw attack and repeatedly tapping a button to complete the kill. I couldn’t help but be reminded somewhat of the light sword attacks from No More Heroes, sans motion controls.

While Warner Bros. and Grasshopper aren’t making it entirely clear how it will work, I was told that earning zombie medals is directly related to how the story will unfold and what parts of it will be accessible to the player. While it will be possible to hack and slash your way through the game and experience the main paths and points of the narrative, only players with patience and skill will see it all. How this plays out — whether you’ll spend the tokens to unlock new areas or if it automatically gives you access to new story bits — is unknown. 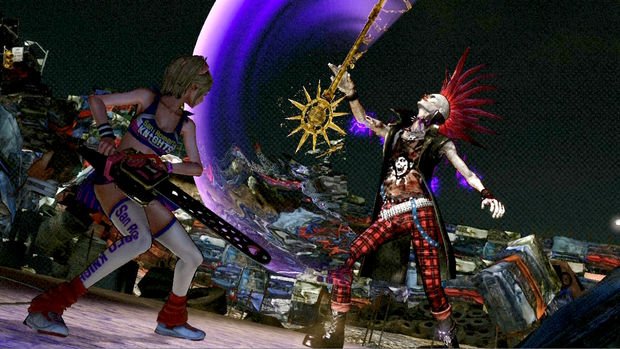 The second part of my playable demo was against the punk rock zombie that was detailed in our preview. This is the guy whose attacks consist mostly of shouting obscenities into a microphone, the sound waves and words knocking me backwards. (Think “Death Breath” from the classic NES title, Kid Niki.) I was being constantly bombarded by large, on-screen text of statements like “Cocksucker!” and “Cooze!” and “Bitch!”. Suda51 is known for designing some insane, over-the-top boss battles; if this is where Lollipop Chainsaw is headed, our sensibilities are in trouble. And I mean that in the best way possible.

Lollipop Chainsaw‘s “herding” combat is an interesting concept, and one that during my short hands-on time I didn’t entirely get the hang of. The idea of thinking about how I’m going to dispatch zombies being directly tied with story rewards is interesting, for sure. I just hope Suda51 and coconspirator James Gunn can keep up the level of bizarre, profane, and quirk that I’m expecting. If that’s the case, I’ll be more than happy to take the time to perfect my cheerleading and zombie killing craft to see it all when the game ships next year.