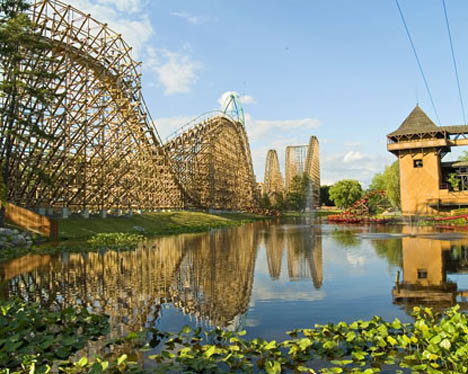 A couple of months ago, Nick came across a hint that said a Six Flags theme park game might be in the works. Now confirmation has come by way of a new announcement from Brash. Yay.

Brash Entertainment has announced a partnership with Six Flags to release Six Flags Fun Park, a video game based on the theme park chain, to PlayStation 2, Wii, and Nintendo DS this fall in North America, according to Gamasutra.

From what they’ve said so far, we know that Six Flags Fun Park is a minigame collection set inside a virtual Six Flags theme park. It doesn’t look like it will be another rollercoaster sim like we first hoped. Well, “hope” is probably too strong of a word.

CEO Mitch Davis: “Everyone has memories of visiting theme parks with their families, and having a great time with games like the Ring Toss and Bumper Cars. With Six Flags Fun Park, we are re-imagining these time-honored tests of luck and skill, and launching the first virtual park in the Six Flags family, while taking advantage of today’s most popular gaming systems.”

The last time I was at Six Flags, I had a horrible time. Trash was blowing around in the walkways, everyone smelled bad, and a hamburger I ordered looked like it had warts. The only thing that saved it was the rollercoasters and relatively short lines.

What do you think of a Six Flags game? Shovelware?