Just be aware of the lack of PS4 racers

I’ve only had one racing wheel in my life outside of the one Logitech just sent me for testing. It was really cumbersome unit for the original PlayStation, and as a kid, it was tough to find room for it long term. By the time I left for college, it was lost to the void.

During the past week or so I’ve been re-introduced to wheel life, and my god, the tech has come a long way. 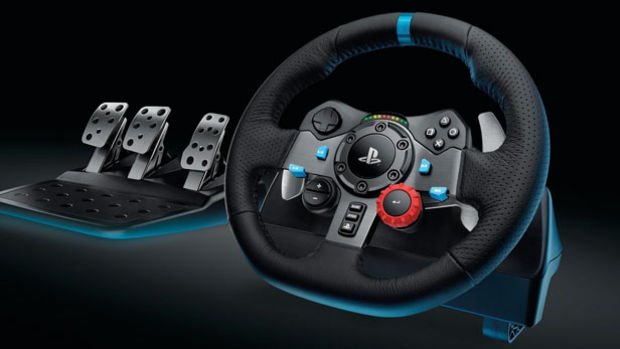 Setting up the wheel and pedal systems was painless, which is the exact opposite of how I remember the wheels of old. Basically all you’re doing is plugging in a power cable and connecting the two units together, and you’re good to go. The only thing that really bothered me was the USB cord that connects to the gaming unit of your choice — it’s woefully short.

My setup places my PS4 inside of a TV stand on the other side of the room, so I had to readjust my furniture to have enough slack to comfortable play on it. Tests with the PC were much more enjoyable, due to the natural layout of my desk (which housed the wheel on top and the pedals underneath comfortably), and the ability to hook it up to a laptop. Onboard clamps also make this wheel much better suited for a hard surface, like a desk.

So what did I test it on? Well, on PS4, your options are almost non-existent– you basically have Project CARS and Driveclub, and that’s it. I tried to use it with games like Rocket League, but to no avail. Thankfully the G29 has a switch located on the top of wheel that allows it to work on the PC and PS3, which have no shortage of great racing games. For the aforementioned compatible games, it worked wonderfully, and both have a host of wheel-specific menu options to fine-tune the experience to your liking.

The two motors that provide force feedback were particularly satisfying, as it feels like a real wheel. While playing Driveclub, I could actually feel the wheel adjust to my experience on the track, which is neat. I’ve heard of noise complaints from the G27, and it seems like Logitech has adjusted accordingly, as the G29 runs rather quiet. The pedals are also composed of a fairly sturdy material, and withstood my tests of slamming my foot onto them to see how they would hold up. As a note, they also don’t shift about that much on hard wood or carpet.

Switching back to the wheel for a second, the onboard button layout looks confusing at first, but it works, and everything from the share button to the PS switch is present. As someone who doesn’t like controlling menus by way of a wheel (San Francisco Rush anyone?), the d-pad works great.

$400 is quite a bit of cash (as is $60 for the shifter add-on, which really should be included), so only spring for the G29 Driving Force if you’re a huge fan of  PC, PS3, and PS4 racing games, otherwise you’re going to run out of things to play for it very quickly. Personally, I’d rather snag the Xbox One edition later this year, which sports the same great design, but with more racers in tow.