[DOLPHINS! The Manchild writes a great post about the ocean and Ecco the Dolphin. As always, remember to load your own blogs into the Community Blogs and tag them with the “Bloggers Wanted Essay Response” tag, and you may see your blog promoted to the front page. – Kauza]

The first time I stepped out into the ocean was a moment of fearless exhilaration and joy. With my Mom sitting on the beach not too far from me, I didn’t even consider the overwhelming vastness that was before me, didn’t even consider all of the possibilities of those unknown depths. I just dove in, had the time of my life, and was always eager to go back, to feel the wonderful feeling of cold, dark immersion that couldn’t be emulated in any swimming pool.

It wasn’t until a random trip to the beach when I lost my will at the hands of a large crab scuttling beneath my feet. That was all it took at a young age to take the wind out of my sails, to find something lurking beneath the water that was unknown, and unexpected. I came out of the water feeling sullen, we went home, and I didn’t have much of a desire to go back after that. The innocence of the experience was gone; there were things in there, things I had to deal with if I wanted to enjoy the sea. Things I had to co-exist with – weird, alien things.

When Ecco the Dolphin appeared on the Sega Genesis back in 1993, it seemed to be just another marketing gimmick, another X the Animal attempt to capitilize on the success of Sonic the Hedgehog. The premise seemed silly to most, controlling a porpoise with a purpose, traversing puzzle laden worlds in the search for his family, and trying not to get turned into tuna along the way. The more cynical older generation at the time dismissed Ecco; they were busy with bigger games, with established franchises. There was simply no room to play as Flipper in their lives. 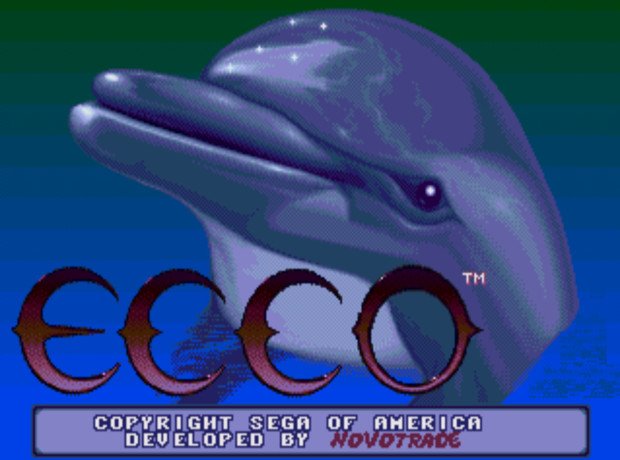 When my Dad first rented it, I was excited. I loved dolphins more than any other animal, and still do to this day. The bright, colorful graphics and amazing photo-realistic quality of Ecco and the happy bay he frolicked within was a visual and auditory feast, and it amazed me that such amazing quality could be achieved back then. If anything, it was certainly proof of just how capable the Sega Genesis was, even if it didn’t become a game changing seller like Sonic the Hedgehog.

But much like that first joyous dip into the drink, the wonder was cut short. After accidentally triggering a shocking event, the storm which sucks Ecco’s family from the sea in a violent explosion of red flashes and bizarre, synthesized sounds, I was once again left feeling scared, uneasy, and cautious. It’s one thing to develop a game with a convincing setting, but something else entirely to make the user feel the mood of that setting, and from that moment onward, Ecco would capture that tone, the fear of the unknown, to an extent that I think no other game has to this day.

During the genesis of its design, series creator Ed Annunziata had a few hoops to jump through so to speak to preserve his original vision; a sweeping science fiction epic with a blackened, mysterious atmosphere that just so happened to feature a dolphin as the protagonist. The attempts at Sega to increase the games marketing friendliness can be seen as soon as one lays their hands on the box itself, and reads the title Ecco the Dolphin. When they turn the game on however, they will notice that the title screen simply reads ECCO, and nothing else. The same is true for the second game in the series which is simply called ECCO 2: The Tides of Time. Something as simple as referencing the species of the central protagonist in a familiar way is a fairly innocent attempt to ease new players into the game, but there were some more insidious design choices being passed around at the time as well. 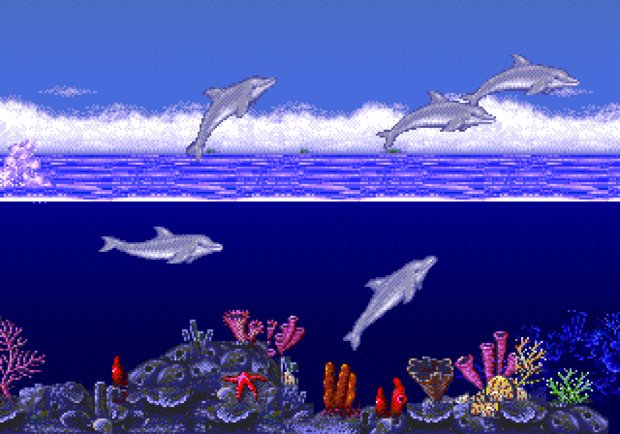 When players first begin the game, they will naturally presume it takes place on Earth – their Earth. However, it becomes abundantly clear later on that there is almost no human influence on this virtual ocean world, apart from an important plot point later on which makes direct reference to a specifically human presence which was destroyed long before the time when the game takes place.

At Sega, Ed had to push for this world free of the hands of man. The marketing department was pushing for oil spills and fishermen among other things as potential threats on Ecco’s journey, but their requests were met with a resounding “No.” on the part of Ed. The reach of the marketing department went even further, suggesting they name the dolphin “Bottlechelli” based on the popularity of Ninja Mutant Ninja Turtles at the time, and their insistence on the main characters using names based on artists.

In the end, the vision of a dark universe based on the laws of “might makes right” with a specifically Lovecraftian tone was preserved; the biggest problem then, was accessibility. If Ecco the Dolphin is anything, it is insanely difficult, and many people were not even able to pass the first screen let alone the second real stage of the game, a very difficult early level known as The Undercaves where there are very few pockets of air. When I tell people today in simple terms that the game is about “time travel and aliens”, they can’t believe it.

They also can’t believe, upon playing the game to call my bluff, just how sinister the world really is. As you dive into the depths of each stage, the gloom begins to build around you, the light blue descending into dark, navy tones. The music is brooding and ambient, the synthesized edge only further serving to build up the levels of panic already inherent in the games stressful, reflex based gameplay. Death comes quick and suddenly for Ecco, and his enemies are many, everything from vicious sharks and prehistoric eels, right down to the levels themselves, with sharp chunks of ice and rock falling and moving in erratic patterns which mean instant eradication upon contact. 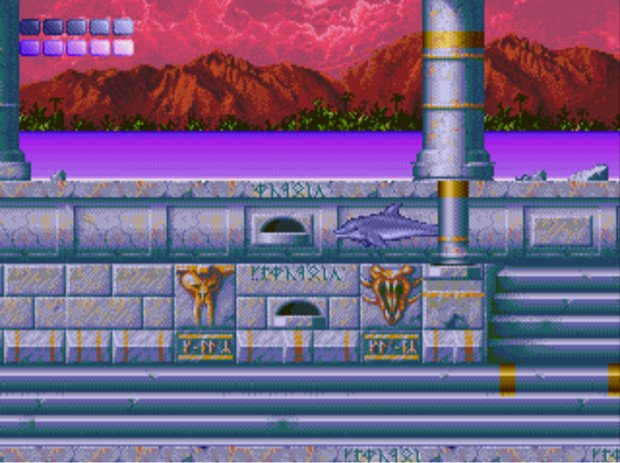 Part of the appeal of the Sega Genesis was the speed of the games, specifically Sonic, which resulted in the laughably transparent marketing phrase “blast processing.” That speed is presented here, and is one of the elements which makes the game so dangerous. In order to thrive within many of the games cavernous, labyrinthine environments, Ecco has to move quickly, hopping from air pocket to air pocket while trying to avoid the many obstacles and enemies in his past. It’s a core part of the game design, but leads to several shocking moments, such as the first encounter with two screen wide Big Blue, a blue whale who has “gone to the north to die”, yet another rather existentialist moment of discovery in the already rather hopeless and dismal world which Ecco portrays.

But no moment for players is more surprising than the first encounter with the unseen foe, the central antagonist of the games narrative, and embodiment of the cruelty of nature itself. Halfway through the game, Ecco makes a discovery which changes the tone of the narrative 180 degrees; the storm that took his family was not a storm at all, but instead a vicious alien race called The Vortex which feed on the planet every 500 years due to their own world being completely destroyed by their own technological prowess. The rest of the game from there on is a race for power, as Ecco tries to gather the abilities needed to travel to the planet Vortex to free his pod, a journey which sends him back to the prehistoric age, and eventually, back to the moment of the storm.

After many punishing hours of puzzle solving and exploration, the moment of truth arrives, and Ecco is granted a moment of relative peace and relief before activating the storm that took his family; and riding up to the planet along with them. And that is when things take a turn for the worse.

The already oppressive, beautiful, frightening, dangerous, and mysteriously alien ocean environments the player has seen up until this pivotal points would have been enough to make a permanent impact, but once Ecco enters the last three stages of the game, he arrives in a Gigeresque nightmare of cold, erratic machinery, strange, bug like aliens, and a soundtrack which is just as decidedly foreign as the new world he has come upon, one that is chaotic and uncomfortable. This is all before he finally faces off with the games last encounter, and one of the most ugly and carnal looking sprites ever put to screen; the Vortex Queen herself, a symmetrical, skeletal monstrosity, and a very embodiment of the games core theme; consumption. 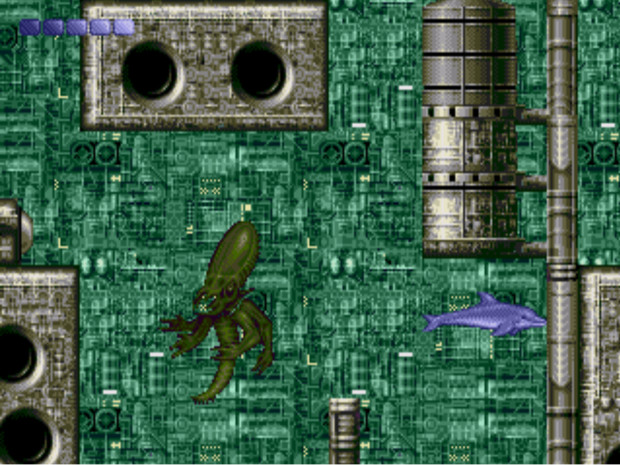 In no other game have I been so terrified of what lied beyond the next screen. In no other game did I enter a world so believable, familiar, and yet also decidedly alien that I obsessed over it for years. While the sequel does an amicable job of carrying on the narrative and continuing the games incredibly strange, science fiction oriented storyline, Ecco the Dolphin created a tone that was felt through and through. It made me feel real emotions, and for the few beautiful moments it granted me when a new environment was introduced, when I was allowed to stay near the surface where things weren’t so dangerous and mystifying, there were many more where I felt alone, lost, and completely defenseless, much like Ecco himself must have felt during that long and perilous journey.

That is the real success of Ecco, and what makes it special. It is ruthless, frightening and cold, but in the midst of this, still decidedly beautiful, much like the ocean itself is. And like the ocean, even though it scared me, I still found myself braving those waters, and diving in for repeated visits.

I just closed my eyes, took the plunge, and embraced the immersion of the terrifying darkness.

TheManchild
I am an aging man with starving children. I write blogs about video games. My favorite system is the Game Boy.