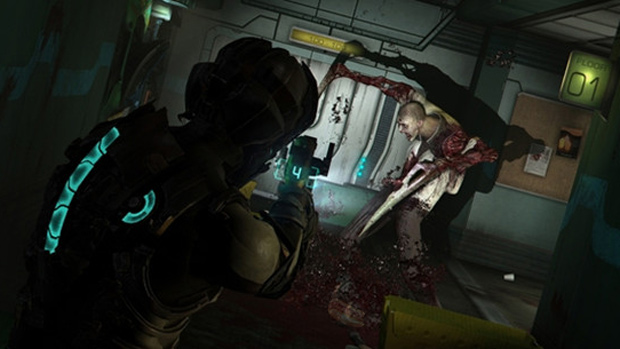 [Revuhlooshun takes us to Titan Station and shows us why it’s such a powerful videogame location. As always, remember to load your own bloggers wanted responses into the Community Blogs and tag them with the “Bloggers Wanted Essay Response” tag, and you may see your blog promoted to the front page. – Kauza]

Probably the most important aspect about the original Resident Evil games, back in the 1990s, was their context. People sigh and groan whenever an old school fan laments about the early days, but there really is something to be said about just how radically things have changed over the years. People forget that you weren’t originally some special agent rappelling off a helicopter or punching boulders – you were an ordinary cop trying to keep your head on. You were painfully human, and with that came all of its vulnerabilities. It was from that humanity that the fear and horror of those games originated from, only to be pushed along by a good closet scare every now and then.

But in addition to that, the locations and their settings cemented that context: police departments, hospitals, parks, even a house up in the woods (protip: only madmen live in the woods). Not only were you human, but so was everyone else. Capcom created an image, an environment, that didn’t take much effort for a player to imagine in his every day. You weren’t in some bumfuck village halfway across the globe – Raccoon City could have been any other midsized American town, awkward and overemphasized vernacular aside.

As the series went on, and these average cops turned into military commandos, that sense of familiarity, of playing upon that sort-of everyday American experience (as best as any Japanese developer could), was unfortunately kicked to the curb. And with each following game, the possibility of ever seeing those sorts of environments seemed slimmer and slimmer with each new run-and-gun.

Then I stepped onto Titan Station.

To me, Dead Space is what every old school Resident Evil fan has always wanted: one long survival game wrapped in a big ass puzzle and stuffed with a lot of cheap scares – and one which doesn’t require a two-week crash course in Tank School every time you want to fire it up. Dead Space is the spiritual successor to Resident Evil, whether you, I, Capcom, or EA wants it.

But what struck me the most with Dead Space, and what really ensured that opinion, was the space station inDead Space 2. It’s a very exotic, futuristic locale that not many people (read: nobody) can claim to really know firsthand. When you finally catch your first glimpse of what it looks like outside however, you realize you’re in a city. It’s a city that looks like any one you’ve been to, minus the floating-in-space part. This isn’t some far flung research base packed with a bunch of dry science types – ordinary people actually live here.

That reality is relentlessly enforced each step you take, the game driving it home every chance it gets, as you walk through shopping malls and apartment floors. What was so foreign and alien in my mind – an outer space colony now turned into a butcher shop – suddenly became much easier to relate to as I could see that the basic, fundamental realities of everyday life were still very well entrenched even way off into the future. Every now and then, between the plasma cutter shots and the people screaming for their lives, an advertisement could be heard somewhere overhead. Some sort of catchy melody enticing people to “Buy! Buy! Buy!” That world, inanimate but very human, still persisted through the carnage and bloodshed, reminding you that you weren’t alone in this.

You weren’t inside of a vacuum. You were in somebody’s home. And I could see myself living in it.

It was the feeling I got playing Resident Evil for the first time, all the way back into the ‘90s. It was the feeling I got when I drained a bathtub only to find a human body inside. It was the feeling I got reading the journal of a guardsman as he chronicled his descent into madness and dementia. It was a feeling I sorely missed, having only newer Resident Evil titles to play which had largely abandoned that human element to them. WhereasResident Evil 4 had you combing your way through grand European castles, Dead Space 2 threw you into a grade school, gave you a flamethrower, and said, “Here, figure this shit out.” It was one of the most surreal times I’ve ever had in a game, though one which immediately bubbled to the surface when asked to write about this topic – and one which made a great impact upon the overall game itself.

It was that human touch, those human details painted in the background for you to find, that propelled Dead Space 2 over its predecessor. Be they the family photos hanging along bedroom walls, or the toys of a child scattered about a classroom, everywhere inside the game you can find the living remains of the long deceased – the world is brought to life not by the people who lived there, but by the things they left behind. It’s one thing to have a location filled with life – one which is very pretty, but also rather static – and quite another to have one that’s actually alive (especially one that is full of death).

The first Dead Space, as much as I love it, can feel boringly isolated at times. It just does not have those human shades to it. Hell, it barely has any humans! But, then again, you’re on an abandoned military cruiser – you shouldn’t be bumping into Larry David for a stop-and-chat. With that said: it still leads to an inferior setting when compared to its sequel. It’s to be expected, given it’s the first child – but boy is it a little less special after you’ve spent some time with the second one.

It helped that Titan Station was indeed beautifully designed, and that the game allowed just enough of it to shine through the chaos. What sold it though – and what sold the game – were those splashes of the everyday, despite being 500 years into the future. It was the only way anybody could have ever expected the player to relate to the situation, and Visceral knocked it out of the park.