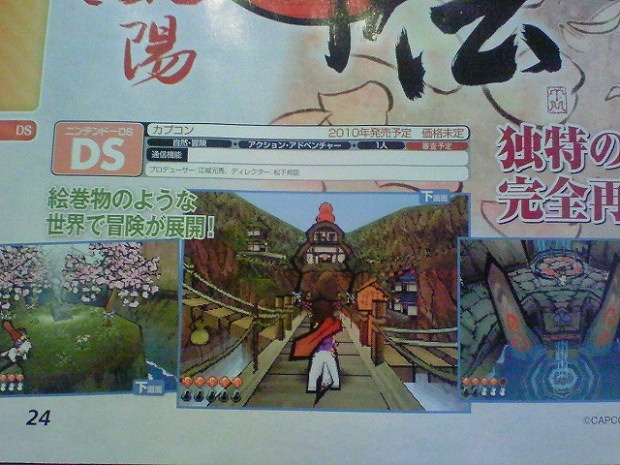 By now you should all be well aware that Okamiden, a sequel to the critically acclaimed PS2 game Okami, is heading to the Nintendo DS. Now there’s a whole wad of information for you to gorge yourselves upon like the greedsome parasites you know you are.

Okamiden takes place several months after the events of Okami, and places you in the furry shoes of wolf pup Chibiterasu. Issun, the guide from the original game, takes Chibiterasu to visit Sakuya, who needs the help of the young baby wolf.

The gameplay is being held under lock and key by Capcom, but it looks like the puzzle solving, exploration and combat of this new game follow the standards set by Okami. The Celestial Brush will be making a return, and naturally it’ll be up to the touch-screen and stylus to paint strokes across the world, slashing the screen to attack enemies and doodling circles to make trees come to life.

Okamiden will differ from Okami with the appearance of partners for little Chibiterasu, who you will need to work with in order to advance the game. For example, one puzzle involves a bridge that cannot be crossed with a partner riding on Chibiterasu’s back. Players will have to draw a path for the partner first, then follow with Chibiterasu afterwards. The first partner character to be revealed is Kuninushi, son of Okami’s Susano. The game will explain how Susano had a child in a matter of months.

Okamiden‘s director, Kuniomi Matsushita, told Famitsu that he wanted an Okami game on the DS to enable as many people as possible to experience Okami‘s beautiful visuals and game system. Matsushita was so adamant on making a portable Okami, he had created a prototype before even telling producer Motohide Eshiro his plans. Obviously, Eshiro saw the prototype and decided a full game would be made, otherwise we wouldn’t be talking about it right now.

And that’s wonderful news for everybody.