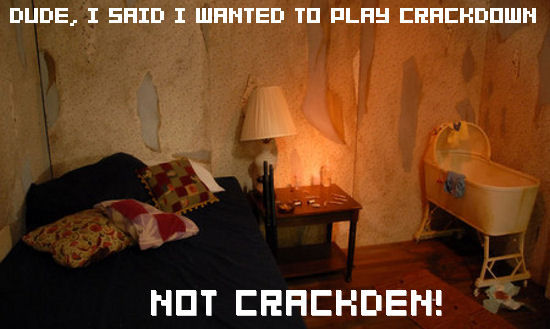 If you’re anything like me, you’ll find drug abuse hilarious, but there are some out there who take it very seriously indeed. Drug addicts, mainly, but university professors as well (who may or may not be heroin fiends themselves). One such professor is Zach Rosenthal of Duke University, whose virtual crackhouse is intended to simmer down those who are peckish for a bit of the ol’ sniff.

The simulation, which I have titled the Lovely Drugs Nom Nom Program is designed to place addicts in make-believe situations where temptations arise, placing them in so-called “crack-related settings” where cravings are experienced. Cravings for drugs. Delicious drugs. In the game, the cravings will subside, and at that point, the game’s supposed magic is worked, as Rosenthal explains:

The therapist tries to tie that moment, when a craving subsides, to a trigger, like a tone. So the addict eventually learns to associate the sound with the sensation of decreased craving…

For example, if an addict ends up in a [real world] tempting situation, he or she can take out the phone donated by the program, dial a number and hear that tone. The addict remembers the sound learned in the therapy session, and the craving should subside.

One plucky crackhead claims that the program has worked wonders for him. “Although I have fallen since I came out of the program, I am clean and have been clean for a good while,” the snowballer beams. Of course, what nobody has pointed out is the reliance that the druggies now have upon this tone. They need to hear that noise to calm down their desires, so we’re effectively causing them to become addicted to sound. Two wrongs don’t make a right, Duke University. Two wrongs don’t make a right.