As you may well know, Media Molecule recently dropped some Metal Gear Solid 4 downloadable content for LittleBigPlanet. Unlike the Festive Level Pack, the MGS 4 stuff is packing quite the punch. It has five campaign-style levels and a ton of MGS assets for your own creations. The question is, how well does it play?

I think the MGS 4 content is spectacular and certainly something that Media Molecule needs to do more of. The five campaign levels (and one bonus) are strung together by a good narrative that has Sackboy defeating a Metal Gear, fighting in VR, spraying paintballs, and even being propelled out of turrets. Most importantly, the developers “stickers” are still all over these levels – that same ingenuity in level construction found in the traditional campaign is present in the new content.

Because of the monumental nature of the DLC, we decided that we needed someone special to walk the reader through what it has to offer. That person is our teenage correspondent, Taylor Tiffany.

Hit the break for her thoughts. 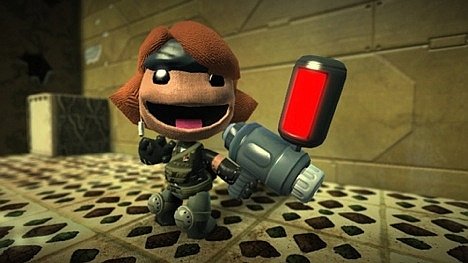 About the Metal Gear Solid 4 Level Pack by Taylor Tiffany

OMG, this is sooo crazy. so, this is like totally my 2nd asignment with destructktoid and an i’m really excited. The crew AND MY NEW HUSBAND TO-BE BRAD NICHOLSON!!! <3 <3 told me to play some level in Meida Molecule’s Little Big Planet. First, I was like wicked scared because i don’t have a PlayStation 3. i asked for one last christmas because AMERICAN IDOL was out for it but my parents said that the PS3 “was only for people who don’t like to have fun,” and I was like “that’s crazy my friend [name redacted at request of legal guardian] plays it all the time. she has this game where you walk around and dance.” 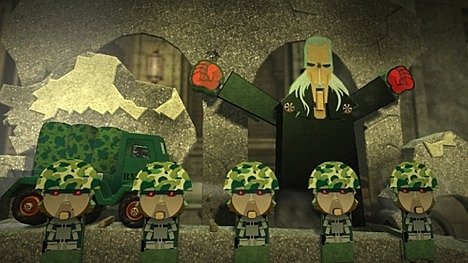 so, it totally begins with a bunch of explosions and a green truck. you can’t move the truck (idk why) and nothing happens except sum dumb text about the war econmy or something. also, a bunch of funny little cardboard cutouts keep popping up. its like that puppet show i went to when I was like six. After about 15 seconds the level ends.

i was thinking this was going 2 b a really aeasy assignment until i got to the second level of the mgs teddy bear stuff. you get to take the teddy bear and walk him through a bunch of blue lines while some weird beeping noise keeps going on in the background. u also get a gun to shoot dumb green things. i really liked the gun but i had to turn the ps3 off for awhile when mommy saw me shooting stuff.

the third level had these spot lights and when you walk into them nothing gud happens. actually, the game makes this funny “exclamation mark sound” and lasers and green balls start flying all over the place. the funny little machine-man at the beginning of the level said i had to use stealth. LOL. he’s so silly. anywayz, after i died A BILLION TIMES!!!! i finally got past the strobe lights and i had to do a bunch more silly stuff. like, i had to shoot paintballs at turrets, hop around and collect those big bubbles that give you stickers and fight this huge tank that fired both greenballs and bombs. it was really tough. 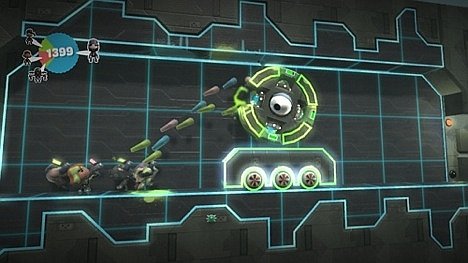 the fourth level was really challenging, but i totally liked it. especially the neat jumping segments where you had to point the gun and shoot at the thing you wanted to jump on. there was also this elevator that stopped like every 2 secs in front of a turret. ROLFLOL, y cant it just keep going?

OKAY, so the last level is a boss fight. there’s this really big machine and its relaly hard to shoot the weak spots. at the beginning of the level some old man pops up and says stuff. Someone at Destrucktoid told me it was “self-refrential humour” WHATEVS THAT MEANS, RIGHT?!? Crazy ppl.

so, that was all the content i was supposed to play. whenever u beat a level you earn stickers and whatnot that u can use to make ur own levels. i dont no y u would do that if the game already has levels. Ppl r crazy!!!! TTYL.

Score: 12 — totally rad (this si the gretest thing ever. srlys.)