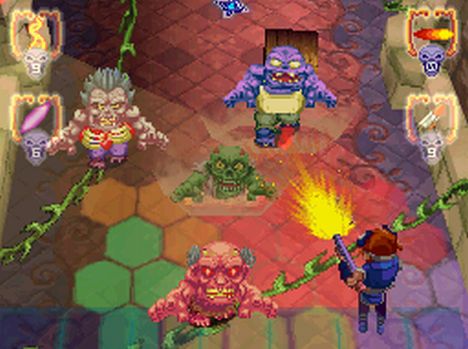 Will there be a better name for any game that comes out this year? I have to be frank here, it’s highly unlikely. When Nick announced this game last it was known as Zombie BBQ, which was a pretty great name on its own. But now the name seems to have lengthened to Little Red Riding Hood’s Zombie BBQ, and my expectations for its greatness have increased exponentially as well.

The official website for the upcoming DS game has launched, where you can explore and learn more about the story and characters. You won’t be surprised to find Little Red Riding Hood has gotten a significantly sexy makeover, but prepare yourself for a new take on Sleeping Beauty, Gretel, Santa Claus and the Three Little Pigs as flesh eating enemies. Nice!

Still no details about whether or not this one will be released in North America or not, but you can bet your sweet, sweet ass I’ll be importing if if it doesn’t make it stateside. Blasting zombies while playing one of the most famous fairy tale characters of all time ranks as highly relevant to my interests.

After finishing with a ferocious wolf, the story ended and the nightmare began. Little “Ready to Rock” Riding Hood and her friend Momotaro face the greatest threat that has ever besieged folk tales.

Go to www.gammickentertainment.com/zombie and discover why Granny has become a horrible green monster, why Pinoccio is now a blood thirsty cyborg, or how Prince Charming woke up Sleeping Beauty… along with her thirst for blood!

Can you save fairy tale land or will you let its creatures live an unhappily-ever-after-life?

GAMMICK Entertainment S.L. is a videogame production company at the heart of the growing Spanish videogame sector. Gammick aims to oversee and nurture the productions of international video game development companies.

Gammick is based in Barcelona and is supported by one of the top five communications groups in the world. Gammick is committed to working with both development teams and international publishers. Our team includes specialists with up to fifteen years’ experience in video game development, production and international distribution.

The production company has solid backing, extensive know-how and attractive production projects that confirms its potential. The twin premises of fun and profitability underline the company’s commitment to produce titles that are easy to play, with direct and immediate satisfaction for the player which ensures success for the publisher.

EnjoyUp Games is an innovative videogame development Studio. The company started with a team that has more than 10 years experience in the entertainment sector and whose goal is to revolutionize the concept of the videogame. The aim of EnjoyUp is always to create new and enjoyable ways to play.

Their philosophy is to create new products that bring new feelings to the player. This goal has been achieved with their latest ambitious and original project for Nintendo DS, an amazing videogame where the action takes place on two screens and, at the same time, adopts a new time concept.