One of the launch titles accompanying the PlayStation Vita is Little Deviants, a cute, cuddly ensemble of mini-games that are designed to showcase the new handheld’s features. Ranging from rear-touch functionality to Sixaxis controls, Little Deviants has it all. While you may think this is just a shameless cash-in gimmick title, after my brief hands-on with it, I would say that’s further from the truth.

Coming off the hype of the 3DS earlier this year, I felt as if the augmented reality cards were a bit gimmicky. After experiencing what Little Deviants has to offer in terms of utilizing the PlayStation Vita to its full potential, I forgot all about those little cards. 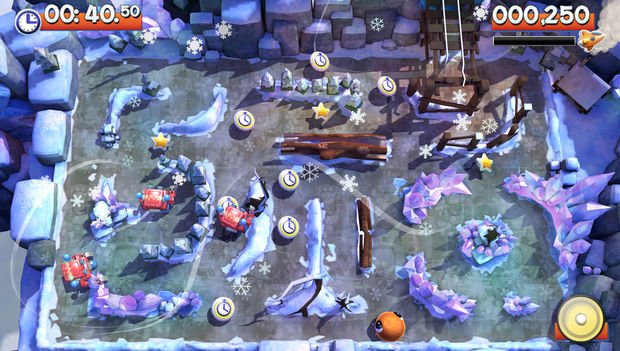 I was able to play three games with my hands-on time: Rotten Rumble, Botz Invasion, and Depth Charge. All were, surprisingly, insanely fun to play.

The first of the lot, Rotten Rumble, is essentially a hybrid of Paper Toss, Brick Breaker, and wrestling. Your task is to use the ropes of the ring as a catapult, launching your Deviant to other areas of the ring in order to hit the enemy robots. This is done by pulling on your Deviant downward, using either the touchscreen, the rear-touch or both. With a quick flick of the fingers your Deviant is launched into the ring, and will act like a pinball that bounces around when hitting the ropes, ring posts, and enemies. The more robots you hit, the more points you gain. Plain and simple. 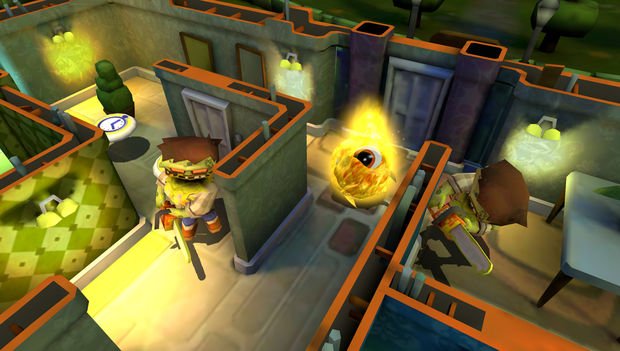 Each mini-game is played in waves, at which point either the enemies will become harder or the level you are traversing will become more difficult to navigate. Here, there was just more enemies on screen, with the occasional big boy to take down.

Speaking of traversing terrain, Depth Charge was the next mini-game I checked out. Think of it like Super Monkey Ball, except that you are on a 2D plane navigating up and down. Your goal is to collect as many of the scattered stars as possible before the bomb at the end of the level explodes.

The Sixaxis is the controller here, and the sensitivity is very, very sensitive. You really need to be relaxed and coordinated when playing this one, as one slight gesture in the wrong way will spell death. There’s practically very little margin for error in Depth Charge, and it’s that aspect which makes it a thrilling, heart-pounding experience. Okay, so maybe “heart-pounding” is a tad too strong, but you get the picture. It’s tense! 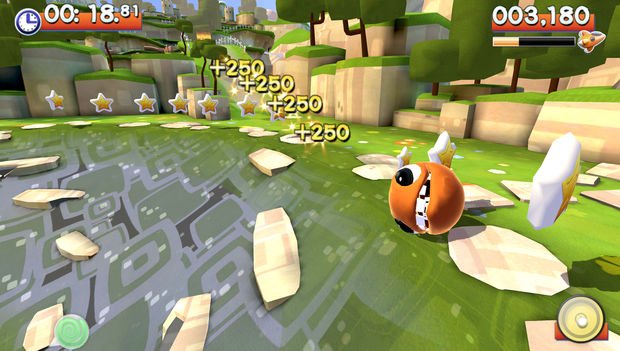 As I increased in waves in Depth Charge, corners were tighter to maneuver, the speed increased slightly, and there were more obstacles in the way. As with Tetris, there’s a gradual difficulty increase, but it becomes quite noticeable as you progress.

The last of the lot, and my personal favorite, was Botz Invasion, an augmented reality game where you are piloting a gunship shooting down enemy robots. These robots are also carrying away Deviants into black holes, and you need to shoot down the Botz before they get too close to said holes. The augmented reality worked phenomenally well, and I didn’t notice any hiccuping with the display. Botz Invasion is also a standing man’s game, as you are forced to turn every which way in order to shoot down those pesky Botz.

There are also a few power-ups in Botz Invasion, such as the EMP, which stuns the Botz in their tracks, and the ol’ faithful set of missles. They don’t feel too overpowered, though they do pack a punch when used. 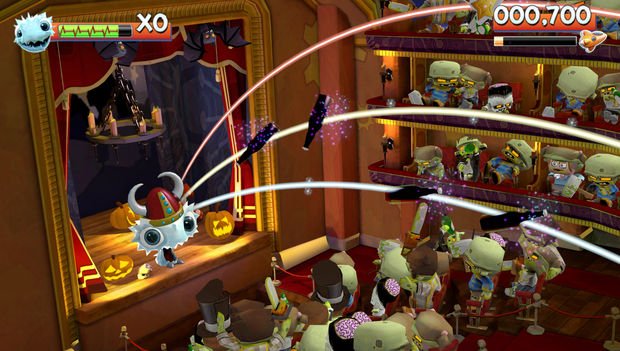 There are thirty different levels in all to play through in Little Deviants, though they mostly are build-offs of other levels. As noted before with Rotten Rumble, sometimes you’ll be using certain features, like only playing with rear-touch controls, or only using the gyrosensor. It may sound a bit redundant, but it does achieve adding replayability.

Every handheld needs that one game that people jump for. Game Boy had it with Tetris, Game Boy Color had it with the Pokemon series, the PlayStation Portable had, uh … and Little Deviants looks like it will be that “it” game Vita owners will want to pick up in order to really test out the hardware.

Deviants feels like more than just a tech-demo. The cute widdle cweatures and bright color palette all come together to form a tight, well-produced game. Besides, who doesn’t like cute stuff?