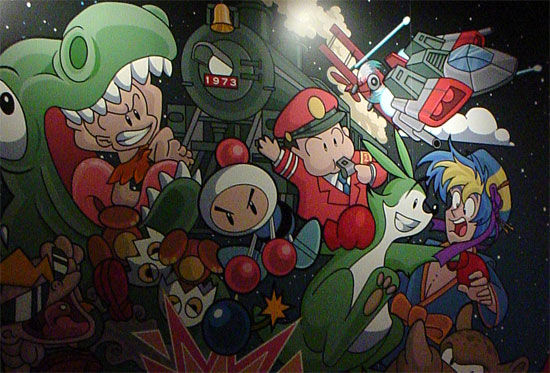 Having already gotten to the big story behind my trip to Hudson, I thought I’d give you guys a little bit more info as to the goings-on of this epic day and how it all went down. Photos, anecdotes, and the most amazing Bomberman tournament that has ever been — why? Well, you’ll just have to read and find out. Let’s just say that no office in all of San Francisco was so alive with expletives as Hudson was that afternoon.

[Ed note: My use of the “adorable incontinence” tag is entirely merited due to the inclusion of the “bomberrhea” aspect in Bomberman Live, an affliction bestowed by the Skull power-up in which an uncontrollable loosening of bombs is experienced by the unfortunate player. And it’s adorable.]

Hit the jump for the full story.

Brand Associate and all-around good guy Aaron King showed up to haul my lazy ass to the office early Thursday morning. We showed up late to the office — hooray for California traffic! — but arrived just in time for the preliminary festivities. After being briefly introduced to the game and some Hudson staffers, we were shown outside to a barbecue under the blazing sun. Bonus: a band was on-hand to provide a soundtrack to our midday grubbing — a punk act headed by none other than PSM Magazine’s own Bill Donohue, kicking out the jams with some Bomberman-themed rockery. Talk about surreal.

The poor soul left to roast in the Bomberman suit is Adrian Ludley, Creative Director at Hudson — living proof that a high-ranking position doesn’t mean jack when there’s a foam-rubber suit to be donned on a blazing hot day. And yeah, it was hot. Mind you, I’m a Washington boy, raised in only the most temperate summers — should the temperature rise above 80°F or so, I immediately burst into flames — so I might not be the best judge of what’s tolerable and intolerable in terms of heat. But seriously, California? You guys ought to invest in a network of mirrors in geosynchronous orbit over your state.

We went inside to get our hands on Bomberman Live — dig my impressions here if you haven’t already — and afterwards I, having caught the glimmer of vintage games in the corner of my eye, made for a hallway behind the conference room that served as our base of operations to check out Hudson’s library of their classic titles. Holy crap, seeing so many of my favorite (boxed!) games in one place was like a return to Mecca.

Hudson’s John Lee, VP of Sales and Marketing, explained that a lot of the vintage stuff was almost thrown out — it was stored in a warehouse up north that was scheduled to be cleaned out, meaning all of this awesome crap was destined for the dustbin. Tragic, I know. Fortunately, John took the initiative, loaded it all up into a truck and brought it home to Hudson’s offices, where it now sits on display and is being carefully cataloged by a league of tenacious interns. Does my heart good to see a collection like this kept intact — a lot of this stuff is damn near impossible to find nowadays, particularly boxed copies like Bill Laimbeer’s Combat Basketball — a game once confiscated and incinerated by governments in almost every territory in which it was distributed. Why? Well, that’s a sensitive question — write your congressman and be on the lookout for men in black sedans.

We also had opportunities to demo some of Hudson’s other upcoming games — Fishing Master on the Wii and Omega Five on Xbox Live Arcade. Fishing Master wasn’t really up my alley, mainly because I lack the mental and motor capacities necessary to operate a simulated fishing rod correctly, but seemed to be shaping up as a solid casual experience on Nintendo’s little white box — a strong counterpoint to some of its more serious-as-your-life,-bitch sporting games it’ll be competing against when it’s released.

Omega Five, being a shmup and all, was more my speed. The game is still deep in development, but what we played showcased the game’s three selectable characters in a brief level of play in which we were able to lay waste to onslaughts of enemies using three distinct control styles. Check out the images in the gallery and keep your eye out for this one — it’s definitely one of the more Linde-aimed XBLA titles in development, which means if you’re a colossal nerd, you’ll want to check it out.

And then, of course, there was the tournament. Here’s how it broke down: around 5:00 PM, the remaining journalists (10 or so of us) and a few Hudson staffers set up a bracketed tournament of four-player, best-of-three rounds. The victors of these four rounds would go on to the final round, where players would battle for supremacy, bragging rights and bushels of vintage Hudson swag, including old t-shirts, Bomberman duffel bags and other stuff. We were arranged by initials and the shit was on.

After two accidental suicides, I pulled ahead and won the first round, setting me in the finals with Wired’s Chris Kohler and two gentlemen whose names were written on a page that I subsequently lost — sorry, dudes. After the first round I went outside to make a phone call — what’s this? My phone’s broken?

Okay, it wasn’t that dramatic — the ritual dismantling of my ancient and free phone came later in the evening. But the screen was all kerfuzzled, which was odd, ‘cos it was a flip phone — free of any risk of getting pressed against the spare change, keys, or gorilla knuckles I keep in my pocket. “Damn!”, I cried aloud. A great day, sullied by technological failure!

I moped back inside, cursing my luck and bemoaning the impending purchase I’d have to make so I could, y’know, see who I was calling again.

I settled in for the final round, staged as a classic mode random-stage affair, best of five. I was getting my ass nailed for the first few rounds, usually by my own hand, which doesn’t make you look too cool in front of, y’know, the goddamn developers. I was sucking, and sucking hard. Before I knew it, the score was 4-3-2-0 — guess who was bringing up the rear? Ayup, good ol’ Linde.

In a deft effort to hide my shame in front of my colleagues, I muttered allowed “this is just so I can stage an epic comeback. I’ll just win five in a row now.” Har har! And oh, we did chuckle. How silly would that be, right?

But then I won a round. Hah, fluke. At least I wouldn’t be entirely skunked. And then I won again, and again, and suddenly the score was 4-3-3-3. There were lots of “holy shits”, and inside my head I was humming the Rocky theme, y’know, to drum up some courage. But all it would take was one win on the part of the leader to knock me out of the running. The round that followed was a tie, as was the round after that. I picked up another win as did the other two runners-up, putting the score at a most epic 4 across the board. I don’t need to tell you that shit was tense, tempers heated, fists about to fly. If we weren’t all united in glorious battle, we would’ve dropped our controllers and gone for throats with sharpened bottle caps just to end it already. But it simply wouldn’t end — we were hit with another tie.

I can’t remember what map served as the battleground for the final round of the tournament, because by that time I was practically delirious with stress. Oh, how I longed for that Super Bomberman 4 duffel bag, even if bringing it into an airport meant instantaneous and invasive search by the TSA — it had to be mine. I went blank and sunk into a waking coma, and during the final round I several times forgot which Bomberman I was, y’know, playing. One player was knocked out, and in a pinch I resorted to the best and most apt strategy for a coward like myself: hiding on the other end of the map, scouring for powerups.

Then it happened: a carelessly-laid bomb took out both remaining players, and without having really done anything, I won. What the hell?

The sound in the room ramped up into a roar; the tournament’s most unlikely had taken the win with an almost otherworldly lack of skill. The prizes were divvied up amongst us. My winnings? The aforementioned beautiful SBM4 duffel, a TekuTeku Angel (Tamagotchi-esque virtual pet that feeds off of your steps courtesy of a built-in pedometer), a Bob Marley coffee table book (your guess is as good as mine), and–

— a Motorola SLVR. This win was goddamn providence.

All in all, a great day. Thanks again to Hudson for furnishing a truly awesome venue for our time with their new product, and big ups to my opponents, who lost only because they were playing against a dude who had absolutely no idea what he was doing, and won in spite of his worthlessness at Bomberman Live.