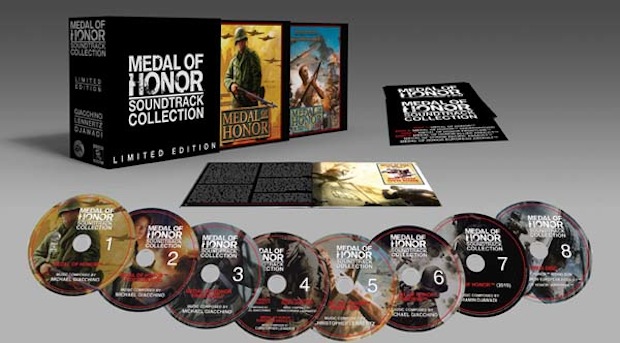 La-La Land Records has released an 8-disc set of music from EA’s Medal of Honor series of games. Each of the eight discs have been remeasured from EA’s vault, and there’s also content from the composers’ private collections. Discs 1-6 cover the score from the original game, MOH Underground, Frontline, Alliet Assault, Pacific Assault, European Assault, Rising Sun and Airborne. Disc 7 is from the new Medal of Honor released in 2010, with added bonus material. Disc 8 has bonus tracks.

There’s also a 40-page booklet with liner notes, and it’sll all wrapped in a cardboard slipcase, complete with a quote by Steven Spielberg.

This collection will start shipping April 15th. The price? Only $59.98. That’s a really great price for this much music. If you’re interested, order now, as there’s only 2,000 of these limited edition units available.